The Group's objective is to exploit the global B2C e-commerce market for shipments crossing borders which is expected to grow from $400 billion today to a total global volume of $1 trillion in 2020. 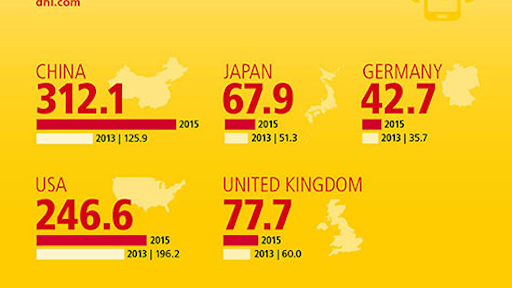 After the first order fulfillment center opened in Columbus, Ohio, last year and followed by a facility in Los Angeles, DHL eCommerce will establish further regional centers in New Jersey and other locations in 2017.

Deutsche Post DHL Group announced a $137 million investment plan for the U.S. domestic and cross-border e-commerce market. The Group's objective is to exploit the global B2C e-commerce market for shipments crossing borders which is expected to grow from $400 billion today to a total global volume of $1 trillion in 2020.

After the first order fulfillment center opened in Columbus, Ohio, last year and followed by a facility in Los Angeles, DHL eCommerce will establish further regional centers in New Jersey and other locations in 2017. Additionally, DHL Express celebrates the opening of a new, $1.3 million service center facility in Chicago to meet heavy demand from e-commerce customers. One year ago, DHL Global Forwarding opened up a $35 million distribution center in Chicago. All of these infrastructural engagements will provide merchants with the opportunity to place inventory closer to consumers in order to speed-up delivery.

"There is barely any other industry that provides such a promising outlook than the e-commerce business. It is expected that one billion people will shop online and across borders by 2020 with the U.S. being the most popular origin for 25 percent of consumers worldwide. With our investments we lay the foundation to expand our leading role in cross-border e-commerce logistics, serve our U.S. customers with the best possible infrastructure and solutions, and gain future market shares," said Charles Brewer, CEO DHL eCommerce.

Editor's Insight: E-commerce is the fastest growing industry, offering logistics companies their greatest opportunity perhaps ever. While the food industry has not been able to expand into e-commerce as fast as hard goods, its expansion is gaining momentum. Where 8 percent of consumers bought groceries online in 2015, that figure is expected to reach 17 percent this year, according to research sponsored by Unata, an e-commerce platform.

Traditional food retailers are struggling with omnichannel fulfillment systems that are needed to support e-commerce. Those retailers who have been able to do this have witnessed e-commerce sales growing at a much faster rate than traditional store sales. In the meantime, pure-play e-commerce merchants are monopolizing most of the growth.

Establishing a sustainable omnichannel fulfillment system requires an investment in software and oftentimes automation. The ROI is challenging in the early stages. Retailers, wholesalers and manufacturers are looking to logistics experts to help them with these challenging but necessary decisions. 7-28-16

Cashing in on Manufacturer Fulfillment for E-commerce

The report proves that B2B salespeople aren’t going anywhere, despite Forrester arguing in 2017 that the B2B salesperson would be displaced by technology by 2020.
March 25, 2020

For retailers joining home delivery for the first time in an effort to mitigate the spread of Coronavirus (COVID-19), FarEye is offering its solution without cost.
FarEye
March 23, 2020

Optimized for fast- and opportunity-charging, NexSys PURE batteries are ideal for light- to medium-duty applications and are available in a range of capacities and configurations.
EnerSys
March 13, 2020
Follow Us