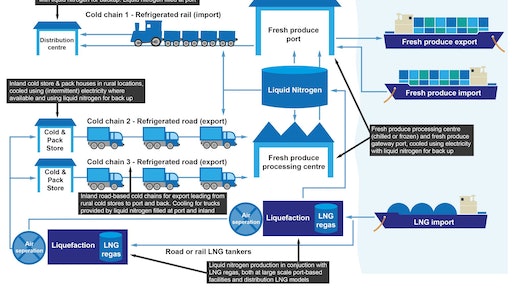 This illustration demonstrates how cold waste from liquid nitrogen gas (LNG) re-gasification could power the "cold economy" in India.

The cold chain, the roots of which can be traced to the 19th Century Industrial Revolution, ensures the availability of high quantities of life-sustaining protein. As it evolved over the years, energy-intensive storage and transportation systems emerged to support it.

Developing markets will be different

The future, however, will arrive faster in the less developed markets that are quickly catching up to the established cold chains of the developed world. The economies of the East – with rising incomes and a growing taste for protein – are investing aggressively in their cold chains. China’s and India’s cold chains are both reported to be growing at 25 percent per year.

But these countries have a long way to go to catch up. And don’t expect them to simply copy the infrastructure that exists in the more developed markets.

If these countries had the same level of refrigerated transport and warehousing as found in the developed world, 200 million tons of wasted food would be saved each year – increasing the food supply by 14 percent, according to a report, “Cold Chains and the Demographic Divide,” by Dearman, a London, U.K.-based technology firm.

But their policy makers have already learned that industrial development comes with a cost (congestion and pollution), and they will consider all available options as they invest in their cold chains. New warehousing and transportation technologies can reduce greenhouse gas emissions, improve air quality, and replace environmentally destructive refrigerants with benign alternatives.

A study by London-based Institution Of Mechanical Engineers and British energy consultancy E4tech has shown how one new technology, liquid nitrogen gas (LNG), can make a difference in a sustainable cold chain. LNG terminals could become the hubs of extensive import-export cold chains, and even develop into a broader “cold economy.”

The study, conducted on behalf of India’s National Centre for Cold-chain Development, shows how a typical LNG terminal re-gasifying 7,100 tons of LNG per day can produce 2,600 tons of liquid nitrogen, enough to provide the cooling for almost 1,100 chilled and frozen refrigerated trucks operating around the clock; and peak time cooling (three hours a day) for 7.5 million cubic meters of chilled and frozen buildings, both at the port and at inland warehouses.

Battery-electric TRUs are already available, as are eutectic plates that store cold in a salt solution (similar in principle to a beer cooler cold pack), both of which are quiet and, with fewer moving parts, lower maintenance.

The evaporation of cryogenic liquids can also power refrigeration. Such systems evaporate liquid nitrogen through a heat exchanger in the goods compartment, which removes the need for a TRU engine and compressor altogether – although power is still required for fans.

Another option is the “cold and power” approach, which produces both cooling and power

from the same unit of liquid air or nitrogen. First the cryogen passes through a heat exchanger to cool the goods compartment. Then it expands through a piston engine to produce electricity to power the fans, or shaft power to drive a secondary conventional refrigeration cycle.

The developing countries stand at a crossroad: whether to build their cold chains using conventional technologies or the cleaner technologies of the future. These countries will ultimately become the leaders of tomorrow’s cold chain.