CNG and LNG are becoming viable options for transportation companies. 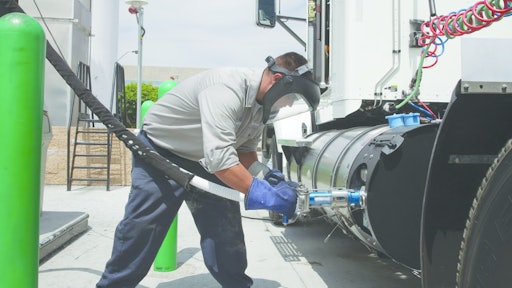 The growth of the natural gas industry is due to a convergence of multiple factors. According to Jim Arthurs, president of engine manufacturer Cummins Westport (a joint venture between Cummins Inc. and Westport Innovations), the energy sector has been developing new and more effective methods of extracting natural gas, while at the same time, discoveries of huge gas reserves across the U.S. have been made in recent years. These large reserves, along with the relative ease of access, is allowing the energy industry to separate from petroleum based products.

In addition, economic forecasts put natural gas prices much lower than petroleum-based fuels for the foreseeable future, and they’re less volatile on commodity markets, which make them a particularly attractive investment. Overall, the fact that such a large amount of natural gas can be produced domestically is a huge incentive for many companies to begin investing in natural gas fleets.

The difference between CNG (compressed natural gas) and LNG (liquid natural gas), is the method of storage. CNG as a compressed gas is typically stored at a high pressure in tanks with reinforced carbon fiber and in gaseous form. LNG is a cryogenic fuel, which is stored in dual-celled tanks with a vacuum space in between. This fuel is stored at very low pressure.

One major concern with natural gas has been safety. However, according to Matt Campbell, product manager for Westport Innovations, “Natural gas is extremely safe.” It has “a very narrow window for combustion so it’s not a fuel that is volatile like gasoline or diesel.” Furthermore, natural gas is also a non-toxic substance and unlike diesel fuel, which is a known carcinogen, natural gas has no toxic properties.

LNG is a cryogenic fuel, which at its coldest is -260 degrees Fahrenheit. From a safety perspective, there is the potential for freeze burn if precautions are not taken, says Campbell. Along with adequate training, anyone filling at an LNG station would typically wear protective items when dispensing the gas, including gloves, a long apron or coveralls, and a face shield.

Campbell acknowledges the concern that some have about the potential volatility of LNG, which generally comes down to whether a vehicle powered by LNG is equivalent to a “rolling bomb,” he says. But, “that’s just not one of the properties of natural gas.”

Meanwhile, in the event of a spill, natural gas will not pool on the ground like other fuels, explains Chad Lindholm, vice president, western region, for Clean Energy Fuels (“Clean Energy”). Instead, it converts to a gaseous form and rises up into the atmosphere where it will not be a danger.

The single largest disadvantage of natural gas is the availability of alternative fuels. LNG filling stations are difficult to find, but that’s changing fast. Companies like Clean Energy, the largest provider of natural gas fuel for transportation in North America, are working quickly to build up the infrastructure. According to the company’s Web site, there are currently about 360 fueling stations throughout the U.S. and Canada. By the end of 2013, it’s expected that another 30 to 50 stations will be completed. Clean Energy stations are also the only ones that offer both LNG and CNG.

Another major impediment for fleets considering making the switch to natural gas is the ‘sticker shock’ associated with the initial cost of the vehicles. Nonetheless, the cost can be mitigated through government incentives and fleets will generally see a return on investment within 2 to 3 years.

Cummins Westport’s Arthurs knows that making a smart financial decision will be the major deciding factor for a company in choosing natural gas over diesel.

While it appears many factors are falling into place for the future of natural gas in the transportation industry, the questions remain as to who is going to make the initial investments to advance its expansion. For example, will companies risk investing in natural gas fleets only to have limited fueling stations? Would a network of fueling stations be built only to lose money waiting for vehicles to show up?

For its part, Clean Energy has decided to take on the risk. We are “confident in the growth of the market place,” asserts Lindholm. “We have gone out and built stations ahead of the trucks.”

Cummins Westport’s Arthurs views it as more of an industry-wide adoption process. In other words, when companies are ready to invest in natural gas fleets the fueling stations will be built.