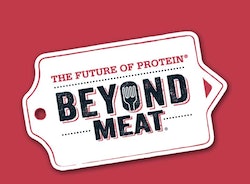 Since going public in May, the company's stock has grown 400 percent, reaching $7.4 billion. Analysts have now adjusted the price target to $125 per share, up from $70 previously.

According to CNBC, the company expects annual revenue to exceed $210 million, more than doubling last year's net sales.  Interest from restaurant chains have made an impact on the company's sales. It is expected that Tim Hortons, which is currently testing a breakfast sandwich made with Beyond Sausage, will add $23 million in revenue just this year.

Beyond Meat reported first-quarter revenue of $40.2 million, up 215% from a year ago, and a net loss of 14 cents per share on a pro forma basis, CNBC reports.