Scientists at the University of Oxford and other U.K. universities launched the “Robot Sheepdog Project” in 1995, and developed a box-size device that could chase a dozen ducks to one place in an enclosed area. 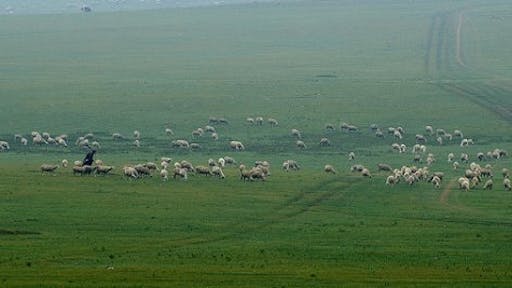 Tech-savvy livestock farmers from the Australian Outback to the Irish countryside are starting to use drones as a relatively cheap alternative to the cowboy and the sheepdog, according to The Wall Street Journal. Camera-wielding copters that can be bought off-the-shelf for as little as $500 can cover hilly terrain quickly, finding and guiding sheep and cattle while the rancher operates remotely—sometimes wearing goggles that show the drone’s perspective.

Scientists at the University of Oxford and other U.K. universities launched the “Robot Sheepdog Project” in 1995, and developed a box-size device that could chase a dozen ducks to one place in an enclosed area.

More recently, researchers in the U.K. and Sweden attached tracking devices to sheep and a sheepdog to collect data on their movements and comprehend the science behind the dogs’ herding success. And researchers in Australia currently are building a four-wheel robot that can pursue cattle at walking pace to calm the cows’ nerves.

Generally, farmers aren’t ready to swap Rover for a robot on wheels. “It’d have to be one heck of a robot to be able to move at the speed and handle the terrain like a dog,” said farmer Rick Powdrell, an executive at a New Zealand farmer’s trade group. “Then there is the question of endurance. I don’t think I have ever had to reboot one of my dogs.”

Flying robots, though, are starting to give sheepdogs a run for their money. Paul Brennan, a supermarket manager in Carlow, Ireland, uses the Chinese-made Q500 Typhoon, a $1,300 quadcopter he calls Shep, to herd sheep at his brother’s 100-acre farm. He says Shep can round up a flock as quickly as a dog or four-wheeler. The pace of progress in drone technology means they will soon be the go-to tool for shepherds, he says. In the meantime, “it’s a good option if you’re feeling lazy.”