What We Can Learn from Harvey and Irma

The storms tested supply chains, but also showed what a resourceful industry we can be. 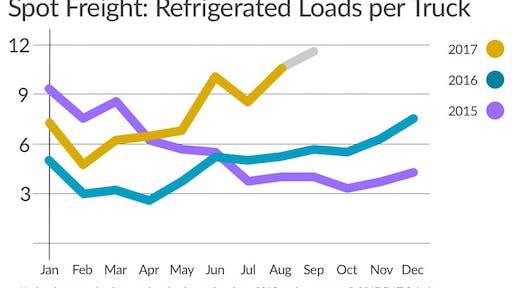 Hurricanes Harvey and Irma were devastating in their own ways, but their impact on freight followed a typical three-stage pattern.

One thing that distinguished Harvey from Irma is the significance of Houston to the national freight economy. Distribution centers near Houston serve at least six states; after Harvey, some shippers began to supply markets ordinarily served by Houston from hubs in the Southeast, including Atlanta, Charlotte and Memphis. Warehouses in the Midwest were called on to supply the Northeast in order to compensate for freight that otherwise would have come from Atlanta. Many of those warehouses had to supply Colorado and other out-of-the-way markets ordinarily served by Houston.

It’s telling that on Aug. 30, when Harvey made its final landfall, the worst truck shortage according to our DAT Hot Market Maps was in Grand Rapids, Michigan. That’s because trucks were being diverted to deliver emergency relief to staging areas like San Antonio and Dallas, leaving shippers in the Midwest scrambling for trucks to move apples, potatoes and other seasonal freight.

The storms tested supply chains, but also showed what a resourceful industry we can be. Many offered equipment and warehousing to organizations like the American Logistics Aid Network. The help is greatly appreciated as the cleanup continues.

Today's supply chains are in crisis mode, and industry experts are already anticipating struggles for 2022 into 2023. Download this FREE whitepaper and discover the opportunities and threats of the New Year.
January 5, 2022
Follow Us