The U.S. government confirmed a highly pathogenic strain of H7N8 avian influenza in a commercial turkey flock in Indiana on January 15, and the virus was found in nine more flocks in southwestern Indiana. 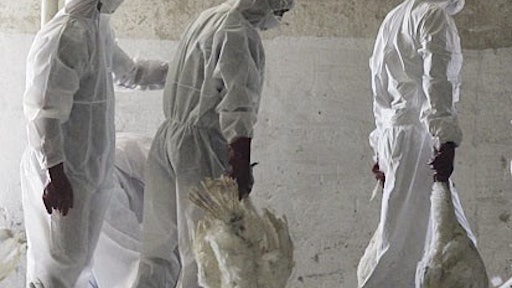 The highly infectious H5N2 strain led to retail prices for eggs more than doubling and sent turkey prices to record highs earlier this year. It also has cost taxpayers nearly $1 billion in cleanup, preparation costs and indemnity payouts to farmers—much of it from emergency federal funds tapped by the USDA’s animal-and-plant health service.

A move to quickly quarantine and destroy Indiana turkey flocks infected with avian influenza may help prevent a repeat of last year’s outbreak that cost the industry $3.3 billion, according to officials, according to Bloomberg.

“We’ve not found any additional cases since Saturday,” T.J. Myers, associate deputy administrator at the U.S. Department of Agriculture’s Animal & Plant Health Inspection Service, said in a Jan. 18 interview. “We’re hopeful that the virus has only been in poultry for a few weeks and that our containment activities will be successful and we won’t see further additional spread.”

The U.S. government confirmed a highly pathogenic strain of H7N8 avian influenza in a commercial turkey flock in Indiana on Jan. 15. The virus was found in nine more flocks in southwestern Indiana. Tests confirmed eight out of the nine have a low-pathogenic strain of the virus, the USDA said in a statement on Jan. 17.

The latest strain, which is different than the one that caused the 2015 outbreak, probably infected one or two farms before mutating into a highly pathogenic version, Myers said. The virus has affected about 400,000 turkeys on 10 farms, he said.

Editors Insight: The USDA and the food industry have done an admirable job in preventing a repeat of last year’s devastating avian influenza virus. The USDA hired hundreds of veterinarians and other temporary employees this fall, states geared up their training programs and food companies deployed precautionary measures like restricting access to farms.

The cost of last year’s outbreak took many forms, including higher egg prices, which translated into higher costs for other food products.