The state's labeling mandate on foods with genetically modified organisms (GMOs) is scheduled to go into effect in July 2016, but food manufacturers are finding even more costs and challenges from the law the GMA said in a letter to Vermont's Governor. 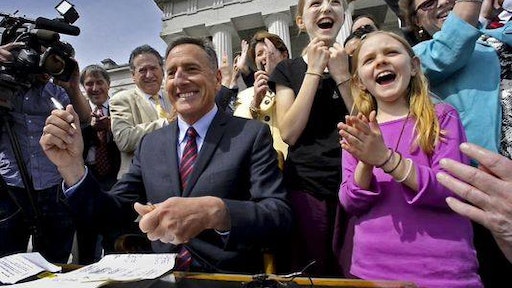 Vermont Governor Peter Shumlin responded to the letter yesterday on his Facebook page:
The Grocery Manufacturers Association sent me a letter yesterday urging me to abandon Vermont's GMO labeling law. Here's my response: Here's an idea for the industry: Just label your products. All of them, nationwide. 64 countries already do it. I'm sure the food industry in America could summon the moral imagination to be the 65th. The industry's real concern is that as goes Vermont so will go America. Plain and simple Vermont's law is about giving consumers the right to know what is in their food. For too long consumers in America have been denied that right. Vermont is saying enough is enough. Give us the right to know.

Vermont’s state labeling mandate on foods with genetically modified organisms (GMOs) is scheduled to go into effect in July 2016, and GMA is challenging that law in federal court. While the case is pending, however, food manufacturers must plan for its implementation, and in doing so, are finding even more costs and challenges from the law, GMA said in a letter to Vermont Governor Peter Shumlin.

“The challenges and costs associated with compliance are inordinate and compounded by the fact that the State of Vermont has repeatedly failed to respond to numerous comments we submitted seeking clarification in the implementation of the law, and has yet to provide any guidance on the subject,” wrote Pamela G. Bailey, GMA’s president and CEO.

In its letter, GMA said that the costs to change labels and supply chain systems will be so great that these costs could exceed revenue to food manufacturers from the sale of products in the state.

The letter highlighted a clause in the law that holds food manufacturers liable for fines of $1,000 a day if a mislabeled product is found on Vermont shelves, even if the manufacturer was not responsible for it being in the store. Bailey explained that with national food supply chains, even with the best of intentions, excellent supply chain logistics and herculean efforts, 5 percent to 10 percent of products might be mislabeled in stores at any given time.

“Vermont’s law imposes a $1,000 daily fine for each item that does not bear the legally designated label,” Bailey wrote. “We estimate that industry wide, there could be over 100,000 items sold in Vermont that would require Vermont-specific labels. That means our industry could be facing fines as much as $10 million per day.”

The House Energy and Commerce Health subcommittee held a hearing on legislation that would set uniform, science-based food labeling standards. Testimony at the hearing on the Safe and Accurate Food Labeling Act warned of the higher food costs and greater consumer confusion from a range of different state labeling mandates and highlighted the need for a uniform national labeling standard. The federal law on GMO labeling would set a national standard and preempt state laws such as the one in Vermont.

“This legislation to protect our national food labeling system has strong bipartisan support, and we are pleased to see congressional committees holding hearings on the bill to understand the issues,” Bailey said. “It is vitally important that the committees move this bill forward so it can be considered and passed by the House this summer and then in the Senate as soon as possible.”

“Indicative of increasing desperation, the GMA’s letter takes hyperbole to a new height of ridiculousness, said Ronnie Cummins, international director of the OCA. “That’s why the OCA has called on consumers across the country to thank Gov. Shumlin for having the courage to stand up to Monsanto, and to challenge the junk food industry to go ahead, stop selling your toxic Twinkies in Vermont!

“We also call on lawmakers in other states, especially Maine, Connecticut, Massachusetts and New York, to stop stalling on GMO labeling laws, and to have the courage to stand in solidarity with Gov. Shumlin and Vermont lawmakers,” Cummins said.

So far, Vermont is the only state that has passed a strong, stand-alone GMO labeling law. Maine and Connecticut have passed laws, but they are ineffective, as they require four or five additional (and in the case of Maine, contiguous) New England states to pass similar laws in order for theirs to take effect.

The OCA supported a bill (LD 991) in Maine this year that would have removed the “trigger” clause so that Maine’s original bill could be enacted without waiting for other states. Unfortunately, Maine lawmakers chickened out, claiming they need to “wait and see” what happens in Vermont.

“Sixty-seven countries that represent 65 percent of the world’s population have already embraced transparency through GMO labelling,” said Cummins. This latest ploy by the GMA to intimidate Gov. Shumlin and Vermont lawmakers is, frankly, pathetic.”