The combination of these iconic food companies joins together two portfolios of brands, including Heinz, Kraft, Oscar Mayer, Ore-Ida and Philadelphia will have eight $1+ billion brands and five brands between $500 million and $1 billion. 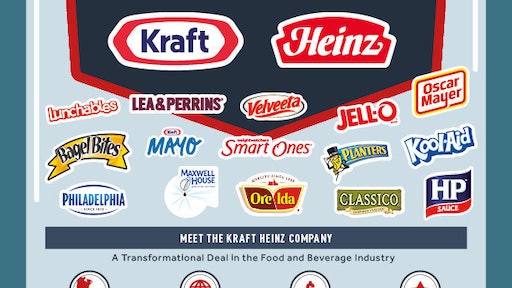 H.J. Heinz Co. and Kraft Foods Group, Inc. announced that they have entered into a definitive merger agreement to create The Kraft Heinz Co., forming the third largest food and beverage company in North America with an unparalleled portfolio of iconic brands.

Under the terms of the agreement, which has been unanimously approved by both Heinz and Kraft's boards of directors, Kraft shareholders will own a 49 percent stake in the combined company, and current Heinz shareholders will own 51 percent on a fully diluted basis. Kraft shareholders will receive stock in the combined company and a special cash dividend of $16.50 per share. The aggregate special dividend payment of approximately $10 billion is being fully funded by an equity contribution by Berkshire Hathaway and 3G Capital.

The proposed merger creates substantial value for Kraft shareholders. The special cash dividend payment represents 27 percent of Kraft's closing price as of March 24, 2015. Also, by continuing to own shares of the new combined company, Kraft shareholders will have the opportunity to participate in the new company's long-term value creation potential.

The combination of these iconic food companies joins together two portfolios of brands, including Heinz, Kraft, Oscar Mayer, Ore-Ida and Philadelphia. Together the new company will have eight $1+ billion brands and five brands between $500 million and $1 billion. The complementary nature of the two brand portfolios presents substantial opportunity for synergies, which will result in increased investments in marketing and innovation.

Alex Behring, chairman of Heinz and the managing partner at 3G Capital, said, "By bringing together these two iconic companies through this transaction, we are creating a strong platform for both U.S. and international growth. Our combined brands and businesses mean increased scale and relevance both in the U.S. and internationally. We have the utmost respect for the Kraft business and its employees, and greatly look forward to working together as we integrate the two companies."

Warren Buffett, chairman and CEO of Berkshire Hathaway said, "I am delighted to play a part in bringing these two winning companies and their iconic brands together. This is my kind of transaction, uniting two world-class organizations and delivering shareholder value. I'm excited by the opportunities for what this new combined organization will achieve."

"Together we will have some of the most respected, recognized and storied brands in the global food industry, and together we will create an even brighter future," said John Cahill, Kraft chairman and chief executive officer. "This combination offers significant cash value to our shareholders and the opportunity to be investors in a company very well positioned for growth, especially outside the United States, as we bring Kraft's iconic brands to international markets. We look forward to uniting with Heinz in what will be an exciting new chapter ahead."

"We are thrilled about the unique opportunities this merger will create for our consumers worldwide, as well as our employees and business partners. Together, Heinz and Kraft will be able to achieve rapid expansion while delivering the quality, brands and products that our consumers love," said Bernardo Hees, Heinz chief executive officer. "Over the past two years, we have transformed Heinz into one of the most efficient and profitable food companies in the world while reinvesting behind our key brands and continuing our relentless commitment to quality and innovation."

3G Capital and its principals have a proven track record of investing in and growing iconic brands. In previous transactions over the years, 3G has partnered with other long-term investors to build significant shareholder value by driving innovation and growth and expanding the international reach of its companies and brands.

Berkshire Hathaway and 3G Capital have a history of successful partnerships and are committed to long-term ownership of The Kraft Heinz Co. as it strengthens its leadership position in the industry.

The Kraft Heinz Co. will be co-headquartered in Pittsburgh and the Chicago area.

Understanding the need to preserve both Heinz and Kraft's heritage in their respective hometowns of Pittsburgh and the Chicago area, the new company is committed to supporting local charities and community relationships in the communities in which they operate.

The significant synergy potential includes an estimated $1.5 billion in annual cost savings implemented by the end of 2017. Synergies will come from the increased scale of the new organization, the sharing of best practices and cost reductions.

The special cash dividend of $10 billion in the aggregate to existing Kraft shareholders will be paid upon closing and will be funded by an equity investment by Berkshire Hathaway and 3G Capital. Shares of the company will continue to be publicly traded.

As the cash consideration is fully funded by common equity from Berkshire Hathaway and 3G Capital, the merger is not expected to increase the debt levels of The Kraft Heinz Co. The Company is fully committed to deleveraging in a timely manner and to maintaining an investment grade rating going forward.

The transaction is subject to approval by Kraft shareholders, receipt of regulatory approvals and other customary closing conditions and is expected to close in the second half of 2015.