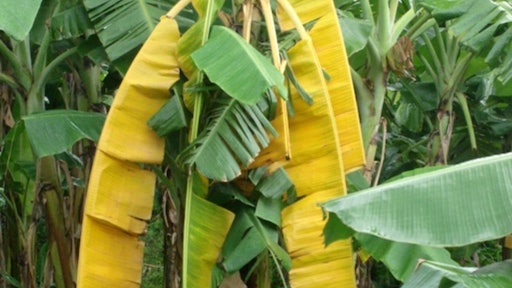 Yellow and wilted leaves are typical symptoms of Fusarium wilt, the yellowing typically progresses from the older to the younger leaves.

The United Nations Food and Agriculture Organization (FAO) has warned that without global efforts to respond to a fungal disease affecting banana production, the $36 billion global industry, which provides a source of income or food to some 400 million people around the world, is under threat, according to The Jamaica Observer.

The agency and its partners said $47 million is needed to tackle the new and deadly Tropical Race 4 (TR4) strain of Fusarium wilt disease, part of which would be used to provide swift on-the-ground assistance to countries facing new outbreaks.

“Fusarium wilt disease has been a major challenge in the history of banana production," said FAO’s head of plant protection, Clayton Campanhola.

“After the devastation TR4 recently caused to bananas in parts of Asia, we have to fear its spread in Africa and the Middle East and also to Latin America (in the Caribbean), and consider it as a threat to production globally,” he added.

Campanhola said that fusarium wilt disease, colloquially known as Panama Disease, brought Indonesia's banana exports of more than 100,000 tons annually to a grinding halt, causing annual losses of some US$134 million in revenue in Sumatra alone.

In the end, food companies must balance the process efficiencies and controls that data transmission and functionality over the internet provide with the risk of cyberattacks that cripple production.
Holland & Hart LLP
August 8, 2021
Follow Us