Agricultural exports are forecast at $143.5 billion, $9.0 billion below fiscal 2014 and down $1.0 billion from the August forecast for fiscal 2015, according to the U.S. Department of Agriculture. 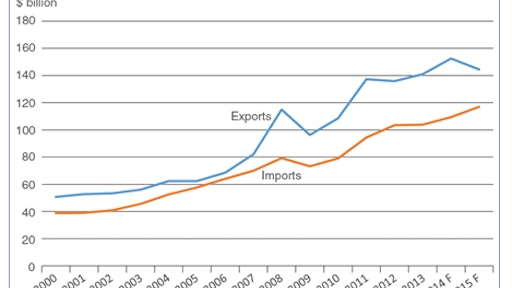 The forecast for livestock, poultry and dairy is raised $800 million to $33.7 billion on higher meat prices, especially for beef, as well as larger volumes for pork and broiler meat.

The events leading to the recent drop in crude oil prices lead most analysts to expect lower energy prices in 2015. In addition, U.S. prices for crude oil and natural gas are expected to remain below world levels in 2015, due to bottlenecks in the U.S. energy refining and transport system.

The U.S. energy situation is expected to provide U.S. oil refiners, farmers, manufacturers, fertilizer producers, and farm product exporters a lower cost environment in 2015. As a result of improved world growth and broadly lower energy and commodity prices, the growth of world trade volume is expected to accelerate to 5.0 percent in 2015, compared with 3.4 percent in 2014. Favorable exchange rates, low U.S. energy costs, expanding international trade, and improved world growth are all supporting U.S. agricultural trade in 2015.