Cargill is becoming a member of The Forest Trust (TFT), the international non-governmental organization that partners with companies to build responsible supply chains. 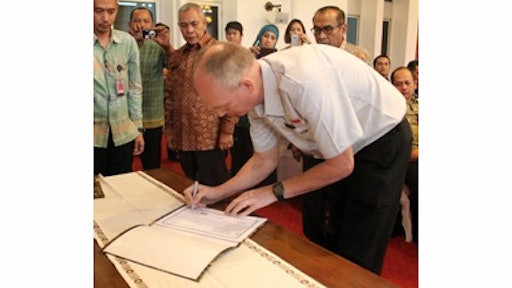 John Hartmann, CEO of Cargill Tropical Palm Holdings, signed a declaration along with others from the plantation industry. The signing took place at the residence of Alex Noerdin, Governor of South Sumatra, in Griya Agung, Palembang.

Demonstrating its commitment to sustainable palm oil, Cargill is becoming a member of The Forest Trust (TFT), the international non-governmental organization that partners with companies to build responsible supply chains, according to Marketwatch.

"We are proud of the work we've done with TFT over the last year and very pleased to become a member," said Cargill's Vice Chairman Paul Conway. "TFT has been instrumental in helping us get the work done that laid the foundation for the new palm oil policy we launched earlier this year. We are now looking forward to continuing the effort and applying the knowledge we've developed in other locations."

Palm oil plays an important role in feeding a growing world population. It is the highest yielding edible oil crop, using less land per ton produced than any other vegetable oil. Millions of people rely on it to feed their families. "We are convinced their needs can be met, while at the same time conserving biodiversity, reducing greenhouse gases, improving people's livelihoods and ensuring food security," Conway said.

In the recent past, Cargill has taken several steps towards building environmentally sustainable, socially responsible practices in its palm oil business. With the help of TFT, the company has mapped the full supply chain of its Malaysian palm oil refineries to the individual mill. Cargill can now offer its customers 1 million tons of traceable palm oil from its own refineries and is continuing its efforts to map third-party suppliers in Indonesia and Malaysia.

At its PT Hindoli plantation in Indonesia, Cargill completed an extensive analysis to identify and preserve high carbon stock (HCS) forest areas, which act as stores for carbon. High conservation value areas, which are a haven for biodiversity, were identified previously. They often overlap with HCS areas and also will be protected. Cargill will extend the experience and expertise it has acquired to three of its local business partners, who will conduct their own HCS studies.

"We've learned a lot from piloting the HCS tool with TFT," said Conway. "We've fine-tuned the methodology and demonstrated that it is, in fact, capable of identifying valuable tracts of natural forests. Now, we're ready to apply the model elsewhere."

Cargill Backs Away from Palm Oil Supplier over Sustainability Concerns