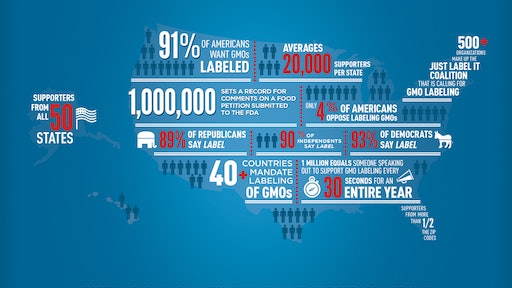 The Center for Food Safety (CFS or the Center) applauded the submission of a record-breaking one million public comments to the Food and Drug Administration (FDA) calling on the agency to require the labeling of genetically engineered foods.

CFS filed the legal petition in October, 2011. More than 450 organizations, businesses and associations came together to support the CFS legal action in the Just Label It Campaign. Several Just Label It participants also joined the Center's petition, and together, the groups collected and submitted over one million public comments to FDA demanding the agency label genetically engineered food.

At issue is the fundamental right consumers have to make informed choices about the food they eat. FDA currently requires over 3,000 other ingredients, additives, and processes to be labeled, but not transgenic ingredients.

"The public has spoken, loud and clear: FDA should require the labeling of genetically engineered foods," said Andrew Kimbrell, executive director of the Center for Food Safety. "Providing basic information doesn't confuse people, it empowers them to make informed choices. Absent labeling, Americans are left in the dark, unable to choose for themselves whether to purchase GE foods."

In the US there is overwhelming public demand — consistently near 95 percent — for the labeling of GE foods.

The US policy of not requiring GE labeling makes it a stark outlier among developed and developing nations.

Although there are very few engineered fruits and vegetables, transgenic varieties predominate in commodity crops: currently, the great majority of US corn is genetically engineered, as is high percentages of soybeans, cotton, and sugar beets. Approximately 70 percent of processed foods on supermarket shelves–from soda to soup, crackers to condiments–contain GE ingredients.

The FDA, USDA, and EPA have never done any long-term human health nor environmental impact studies of GE foods or crops, despite the fact that FDA's own scientists have concluded that these foods could pose serious risks. Laboratory and field evidence shows that GE crops can harm beneficial insects, increase pesticide use and transfer GE genes in the environment, thereby contaminating neighboring crops and creating potentially uncontrollable herbicide-resistant weeds. Many of the public comments focused on these health and environmental impacts.

CFS's legal petition explains a myriad of scientific and legal grounds supporting the labeling of GE foods. The current lack of any labeling makes GE foods misleading, in violation of FDA's duties.

GE foods' differences from conventional foods are underscored by the fact that they are patented for their novelty, yet they remain unlabeled. GE crops have also shown they carry with them significant novel environmental harms, such as transgenic contamination of non-GE and wild crops, and massive increases in pesticide use. Finally, the public's underlying fundamental right to know what they eat and feed their families supports labeling.

Comments to FDA are still being collected on the Center's website at www.centerforfoodsafety.org

Proposals to Label Genetically Engineered Food Gain Interest across the US