The majority of captures are light-attracted insects because they are often attracted to the building for the same reason that they end up in the trap -- the lights. 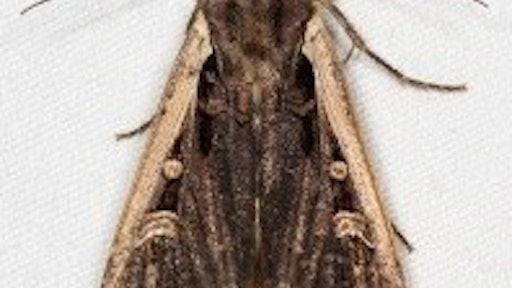 Often, most insects captured in light traps inside a food warehouse or food plant are not structural infesting pests. Operators can find stored product pests and filth flies, but in most facilities, these are the smallest percentage of the total insect count. The majority of captures are light-attracted insects, which have made their way into the building through an open door or vent. They are often attracted to the building for the same reason that they end up in the trap -- the lights. They may breed in water, feed on vegetation or are predaceous on other insects and will not survive or reproduce in a food facility. However, they may contribute to consumer complaints. Exterior light management and exclusion are the keys to reducing indoor problems with these insects.

Non-biting midges are medium-sized, slender flies often mistaken for mosquitoes. The males will have feathery antennae. They can range in color, but most are black or brown. Facilities near ponds or lakes will more commonly see midges of various types in their light traps. These insects may be attracted to structures in large numbers particularly in the spring.

Leafhoppers and plant hoppers are herbivores and feed on the juices of a variety of plants. They can be green, yellow, brown or a mixture of colors. The body is wedged shaped and less than ¼-inch in size. They may be found feeding on the underside of host plants outdoors. It is not uncommon to find these insects in light traps.

The ground beetles comprise of one of the largest groups of beetles in North America. They are typically black in color with ridges on their wings. However, color can vary. One common species, the  is bright green metallic and black in color. They are active at night and will often fly to lights. Most are predaceous on insects and for this reason, considered beneficial in nature.

Thrips are extremely small insects, less than 1/20 inches, most are plant feeders. They can range in color from white, to pale yellow to brown and are slender insects with fringes along their wings. Although they are considered poor fliers, some will float on air currents and travel long distances. Due to their size, they can get through average mesh screen sizes.

The green stink bug and the brown marmorated stink bug are two of the more common species. The brown marmorated stink bug will intentionally enter structures in the fall for an overwintering harborage. All stink bugs will have a triangular or shield like body shape and may be ½-inch or larger in size. Most are pests of plants, feeding on plant juices with their sucking mouth parts. They can be serious agricultural pests, causing damages in the millions of dollars to crops. They are called stink bugs because of their ability to excrete offensive odors as a defense mechanism.

There are several different species of night flying moths that may enter a building. Most are agricultural or turf pests which leave the field and are attracted to the lights of structures. They are drab in color with very little coloration on wings or wing patterns. Examples of these moths include cutworms and army worms in the insect family, Noctuidae.

How are they controlled?

Although these insects are accidental invaders and will not reproduce indoors, they can contaminate products and packaging materials. Reducing the attraction to the structure is the first step by managing exterior lighting. The second step is reducing pest entry points through proper exclusion methods of keeping doors closed and other openings sealed or screened.

Insects use light in navigation and are attracted to lights for this reason. The warmth generated by light may provide secondary attraction. Not all lighting is created equally when it comes to the level of attraction. Reducing the highly attractive lights, those in the bluer end of the light spectrum is advised. The most common type of lights in this range are mercury vapor lights. Use less attractive lighting in the 575-600 nm range on buildings. Examples of commercial lighting in this range are the high pressure sodium vapor lights. It is estimated that mercury vapor lighting is 112 times more attractive to insects than sodium vapor lighting, which can provide major differences in the numbers of insects attracted to the building. The mercury lights can be identified as having a stronger whitish blue light vs. the sodium vapor lights, which appear more yellow in tone or color.

LED lighting for exterior lights is becoming more popular. The range of LED lights can vary considerably and before purchasing, the food plant should determine what range of light is emitted. Avoid using LED lights in the same range as mercury vapor lighting (450-500 nm) for fixtures mounted directly on the structure.

Exclusion is another important element of managing these insects. Food plant staff should be educated in the importance of keeping doors closed, when not in use. Timers and alarms and automated closures can assist in insuring compliance. If a door must remain open for ventilation purposes, they should be fitted with tight fitting screens. In addition, make sure that exterior door side and top pads and guards are used to help seal around dock doors when trucks are unloading or loading. These pads will get damaged overtime and they should be regularly examined for wear and tear and replaced as needed. Additional portable sealing devices may be necessary for placement on the floor area where the dock plate ramp enters the trailer. These devices are sometimes called draft blockers and look like large bean bags. Avoid using trailers as secondary storage where the trailer is backed up and open all shifts. This practice is sometimes used for pallets or recyclables. If this secondary storage area is needed, keep the dock door closed when not actively loading or use inflatable dock seals to get a more perfect fit.

Strategically placed insect light traps can be used as another line of defense in protecting food from light attracted insects. Light traps utilize the same attraction that brought the insects into the building in controlling them. There are a large number of different insect light trap manufacturers and models available to the food industry. Most manufacturers will offer glue trap models and electrical grid models, sometimes referred to as zappers. The electrical grid models will deliver an electrical charge to the insect as it passes through a grid in the trap. Dead insects fall into a tray for later disposal. The glue board based traps use the same light to attract insects but rather than kill the insects with an electrical charge, the insects are captured on a glue coated cardboard insert.  So, which is better, glue or grid? It depends on the sensitivity of the area, pest pressures and desired need for pest identification. Grid traps tend to have a slight advantage in ability to capture larger quantities of insects due to over-all size of the trap. These are more often used in warehouse areas where dock doors and delivery activities could present heavy insect pressures. On the other hand, counting and identifying insects for tracking and trending purposes can be easier with a glue board based trap. The insects are confined to the glue and less risk of insect parts or dead insects being carried out of the trap via air movement or trap disturbance. Glue board-based traps are more commonly used in food preparation areas.

Most insects will be attracted to a light trap from 100 feet. House flies have a slightly shorter range of 20-25 feet. That doesn’t mean we should place traps at 25- or 100-foot intervals. Instead, look at the potential entry points and strategize to find the best interception points. Think about the potential path of the insect coming through an open personnel door or dock door and where the best location for capture could be. Vestibules can be one of the best areas to install traps for invaders coming through personnel doors. At the same time, we want to make sure that our traps are not visible from the outside via windows or doors. Traps facing outwards, towards a bank of windows, can be responsible for bringing insects to the building.

The height that a trap is placed from the floor can important in capturing different groups or species. Placing the trap at a level around 4 feet from the floor is ideal. Some third-party auditors and FDA’s Retail Food Code will have specific guidelines for installing traps a certain distance away from open food product. When specified, these distances can range from 8-30 feet. For example, the American Institute of Baking states that traps should be installed at least 10 feet away from food contact surfaces. FDA’s Retail Food Code indicates that insect light traps cannot be located over food preparation areas. Some standards have two different guidelines based on whether the trap is located near exposed product versus packaged product. Regardless of the audit standards or code, it is not a good practice to place a trap in an area where it may draw insects to exposed food or food contact surfaces. It has been shown that pathogens can be shed from insects like filth flies during flight. To reduce the potential of pest contamination and pathogens, place lights with these risks in mind.

Here are the crucial elements in preventing rodent intrusion and exclusion, the common areas for rodent entry and some of the tools and techniques used to keep these pests out.
McCloud Services
November 16, 2020
Follow Us