New study and digital map show the potential cost of tariffs to jobs, income and tax revenue for every US state and congressional district. 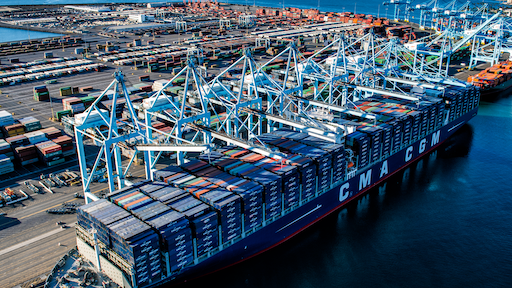 A study by the Port of Los Angeles shows that tariffs are threatening nearly 1.5 million U.S. jobs and more than $186 billion of economic activity nationwide. The potential risks are based on the impact of tariffs levied on cargo handled by the nation's busiest container port complex.

The report,  “By the Numbers: Jeopardizing the National Benefits of Trade through America’s Busiest Port Complex,” demonstrates how many jobs and how much sales, income and taxes are at risk for every state due to tariffs, based on international trade through the San Pedro Bay ports of Los Angeles and Long Beach. The study also shows the economic benefits of these iimports and exports to each congressional district and identifies the percentage burdened by tariffs.

“Every urban, suburban and rural community across our nation benefits from imports and exports moving through the San Pedro Bay ports, and ongoing tariffs are putting those benefits at risk,” said Port of Los Angeles Executive Director Gene Seroka. “Some regions and industries are already feeling the pain, and the damage to jobs, income and tax revenue could be crippling down the road.”

“This study provides graphic proof that a trade policy relying on overuse of tariffs can rebound badly on America, causing more harm than good to our long-term economic health,” said Rufus Yerxa, President of the National Foreign Trade Council. “The Administration’s imposition of tariffs as high as 25% has raised costs for everyday consumers of basic products such as food and clothing, home appliances and our ubiquitous iPhones. That’s bad enough, but they also cause untold damage to our most competitive manufacturers and farmers, rendering them less competitive at home and abroad as production costs increase and foreign retaliation shrinks their exports. It is now clear that a tariff war without sensible constraints is a lose-lose proposition for the vast majority of Americans.”

The study shows that tariffs imposed over the last two years could add additional costs, ranging from $31-35 billion.

“The study focuses on the impacts of tariffs based on trade through the San Pedro Bay ports,” Seroka said. “The implications are much bigger when you consider all U.S. ports, so the effects that the Port of Los Angeles is seeing should concern all U.S. ports of entry.”

Cargo moving through the nation’s largest container port complex is valued at more than $380 billion, and the economic activity it generates—including more than 3 million jobs nationwide—is a bellwether for the health of the overall U.S. economy. Imports through the ports of Los Angeles and Long Beach flow to every state in the nation, and goods grown or manufactured in every state flow through these ports to reach global markets, predominantly Asia.

U.S.-imposed tariffs have triggered retaliatory tariffs. The vast majority of U.S. tariffs target trade with China, the world’s second largest economy and America’s largest source of imported products. China accounts for 54% of imports and 29% of U.S. exports moving through the San Pedro Bay ports, based on value.

The effect is a threefold disadvantage for U.S. businesses and workers. First, import tariffs increase costs for U.S. consumers and producers. Second, tariffs make foreign products cheaper to manufacture, putting U.S. manufacturers at a cost disadvantage in the marketplace. Third, retaliatory tariffs reduce the demand for U.S. exports, putting U.S. companies and jobs at risk as foreign consumer markets look elsewhere for goods and products. Cargo volumes at the Port of Los Angeles for October reflect these trends, marking 12 consecutive months of declining U.S. exports, 25% fewer ship calls, and a 19.1% decrease in volume compared with October 2018.

The toll has been especially heavy on the U.S. agricultural sector, with 26% to 51% of exports from all 50 states hit by tariffs, based on trade through the San Pedro Bay ports. The top 10 most vulnerable states are California, Illinois, Kansas, Nebraska, Iowa, Texas, Louisiana, Ohio, Arizona and Missouri. Within the last year alone, exports of U.S. animal products and feed dropped 10% year over year based on January through August of 2019 volumes.

“Tariffs are a tax on U.S. companies and consumers. Recent data from Tariffs Hurt the Heartland shows Americans have paid an extra $38 billion in tariffs because of the trade war—and that number is only getting higher,” said Jonathan Gold, spokesman for Americans for Free Trade. "While the administration continues to claim that China is paying the tariffs, it's clear the real casualties are American businesses, farmers, workers and consumers. As the trade negotiations continue, it is imperative that both sides come to a final agreement that removes all tariffs."