The slow adoption of online food ordering could indicate that people enjoy picking their own groceries in person, or that they don't see sufficient savings of time or money to justify the switch. 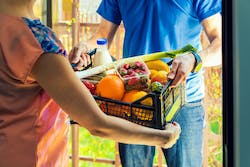 For now, Americans are sticking with the traditional ways of getting food -- shopping for groceries in person at a grocery store, eating meals at restaurants and ordering food for take-out or delivery. At least seven in 10 U.S. adults purchase food in each of these ways at least once a month.

Gallup's annual Consumption Habits survey, which was conducted July 1-12, 2019, first asked about ordering groceries online in 2017, and the results are essentially unchanged since then. At that time, 84% said they never order groceries online, and 9% did so at least once a month.

The slow adoption of online food ordering could indicate that people enjoy picking their own groceries in person, or that they don't see sufficient savings of time or money to justify the switch.

Online grocery shopping is more common among parents and upper-income adults -- 19% of those with children under age 18 order groceries online at least once a month, as do 18% of those with annual household incomes of $100,000 or greater.

Americans between the ages of 30-49 are also among the subgroups most inclined to get groceries via the internet.

Adults who are employed full-time (15%) are slightly above the national average for buying groceries online.

Based on these demographics, Gallup assumes that those ordering groceries online are doing so out of convenience and likely aren’t daunted by the additional service charges.

Meanwhile, in-person grocery shopping shows no obvious signs of decline, with the percentages this year similar to those from 2017 and 2018. In-store grocery shopping is by far the most common way Americans get food, with 83% saying they shop at grocery stores at least once a week, including 37% who do so more than once a week.

As consumers continue to purchase many of their goods and products online, the one thing they are slow to change is ordering groceries.