It Keeps Going And Going... 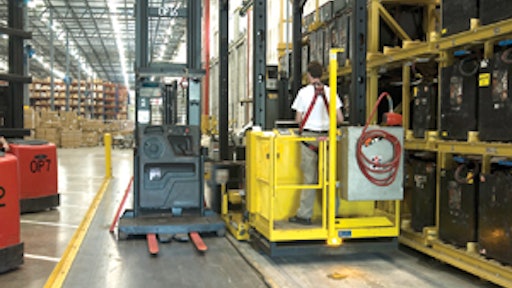 Think of a warehouse as a living, breathing entity. There is constant activity going on--receiving and shipping, putaway and picking. The forklifts servicing this entity are its life blood and without them, the warehouse would die.

To keep a fleet functioning at its peak, it's critical to realize the importance of the fast and opportunity battery charging technologies that are available. Fleet managers also need to ensure that lift truck battery maintenance is performed on a regular basis.

A one-shift warehouse operation typically involves a lift truck being put through its paces for eight hours. When the shift is over, the truck's battery undergoes an eight hour charge and then another eight hours for battery cool down time. If the warehouse is running a two-shift operation, typical procedure is for the next operator to change out the battery and put a new one in. Meanwhile the previous battery is put in the battery room for it to undergo its charging/cool down cycle.

"With fast-charging or opportunity charging, we run an opportunity charge cycle. We don't have to change out the battery for a two-shift operation or one long one," explains Steve Spaar, director of marketing for Enersys, Reading, PA, a leader in stored energy solutions for industrial applications.

Spaar says that with fast-charging and opportunity charging, operators will charge their batteries at every opportunity that presents itself during the day. The goal is to keep the battery at the highest state of charge possible in order to run it through one shift. The key here is making sure the operator plugs in every time he can. If a lift truck battery is drained too far, when a break comes up, the operator may not be able to return enough amp hours to it in order to get through to his next break.

"Plugging the battery in at the rate that these new chargers are putting energy back into it can reduce charging cycles by as much as one half," says Bobby Hopkins, inside sales manager for Hyster Co., Greenville, NC, a lift truck manufacturer. "In addition, analyses we've done with our battery partners show that companies can save as much as $2 a charge using opportunity or fast-charging."

Which should a facility use? The choice depends on the charge cycle or the energy used during a shift. Operators may need to pump energy in faster in order to maintain an optimum charge throughout their shifts.

"It's really a factor of how many amp hours are taken out of a battery at a given time, versus how much time there is to plug a battery in," says Dean Portney, national account manager for Hawker Powersource Inc., Chattanooga, TN. "This is going to tell us how quickly we need to put amp hours back in."

Hawker can help determine what charging methods are suitable for a fleet by putting meters on its lift trucks to look at the amp hour throughput for the vehicles. It will use the data inferred from the meters to determine the proper size chargers to utilize.

Portney explains that the limit in fast-charging is no more than two battery capacities a day. "A 1,000 amp hour battery is designed to be discharged 80 percent or 800 amp hours. If the operator is discharging more than 1600 amps a day, we don't feel they're a suitable fast-charge application."

Switching from a standard battery operation to a fast or opportunity charging operation can provide benefits to a warehouse.

"You can immediately cut your investment in batteries," notes Bret Aker, CEO and founding partner of Aker Wade, a Charlottesville, VA, company that makes fast chargers.

According to Aker, an operation that has 100 vehicles and utilizes traditional charging systems will need 200 to 300 batteries to keep its fleet running on a two or three-shift schedule. With fast-charging you only need one battery per vehicle.

Perhaps the biggest advantage that switching to a fast-charging solution brings is the elimination of the battery room.

"The single most basic thing they can do to keep a battery health is to water it after its equalization charge," says Harold Vanasse, vice president of sales and marketing for Montgomery, PA-based Philadelphia Scientific, a maker of battery maintenance tools.

Due to the fact that a battery goes through the water portion of its electrolyte during its charging process, Vanasse says, it is critical to keep it watered to the correct levels--otherwise it will die and fail to give the operator runtime. The frequency of watering depends upon how hard the application is.

Another danger is overwatering a battery. If an operator puts too much water in, when the battery is charging it will boil over and eject electrolytes. Should this happen while the battery is in the truck, the acid in the electrolyte could damage the vehicle itself.

"Every time you boil over a battery, you lose three to five percent of the runtime of that battery," explains Vanasse. "That's about 20 minutes. Do it again and that's another 20 minutes. This can get very expensive."

Manufacturers suggest two important tools that can reduce the chances of under and overwatering in a battery. The first is a single point watering system. This is a universal connector that hooks up to a battery on one end, and a water hose on the other.

"It allows you to put water directly into the battery's cells through a valve in each cell and distributes it evenly in each cell," notes Hyster's Hopkins. "It also makes it easier for the operator to water the battery, because in a lot of reach trucks and order pickers, it's hard to get to the battery watering point without extracting the battery."

Using a single point watering system is also much faster than having an operator do it manually--anywhere from 15 seconds to two minutes, as opposed to 20 minutes by hand. In this way, the experts say that a watering system will pay for itself within a year.

The second tool is a battery monitoring system, which alerts an operator that his truck's battery requires watering through a blinking light on his dash. This can help prevent a battery from drying out.

Companies should also consider a de-ionizer, if their water supply has a high mineral content (what's known as "hard" water). These minerals poison the negative plates on a battery over the course of a few years and shorten its life. The de-ionizer connects into a facility's water supply and as water goes through it, it removes the minerals.

In addition to watering, another key to maintaining a battery is to apply an equalizing charge to at least once a week, before watering. This is important because during regular charging, all of the cells may not charge at the same rate as the others.

The purpose of equalizing is to bring all the different cells' voltages up equally and ensure that the electrolyte in the battery is mixed properly. A variance in cell voltage will drain some cells harder than others and these cells could die out.

May 29, 2020
Latest in Material Handling Equipment