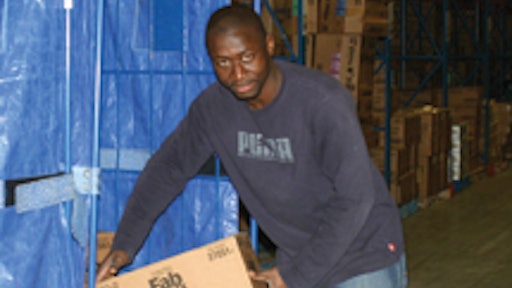 If anybody's an expert on urban delivery, it's Don Yuhasz, the vice president of distribution for Duane Reade, the largest drug store chain in the metropolitan New York City area.

Of the more than 240 stores the 48-year-old company operates throughout the city's five boroughs and northern New Jersey, 150 are located in Manhattan, a highly congested area.

With no loading docks at most of these units, drivers often make deliveries through the store's front doors during business hours, blocking busy streets and sidewalks for hours.

"We knew our delivery method was not conducive to product flow," says Yuhasz. "We were delivering mostly pallets to the stores. The driver would drop the pallet on the curb and then it would be broken down by store personnel--with the manager standing by. It was taking a minimum of two to three hours to unload the truck at the store, tying up both the driver and the store manager."

Seeking a more efficient way to unload the trucks, Duane Reade teamed up with Gebhardt Transport and Storage Systems, a German manufacturer of rolling containers. Gebhardt's products have been used by leading European food distributors and retailers for decades.

Typically, the roll carts are loaded with cases at the distribution center, wheeled directly onto the truck and then off and into the store.

Yuhasz thought the roll carts might be a viable solution for Duane Reade and the two companies developed a couple of prototypes, which were tested for six weeks with a select group of stores. "They loved it so much we decided to move ahead with the carts," he says, which the company began rolling out to its entire chain in July 2007.

Constructed of steel-reinforced plastic, the roll carts are 28 x 32-inches wide and stand 67-inches high. They have load capacity of 1,100 pounds and are totally capable of being broken down and stacked. Approximately 27 carts can fit into a 26-foot truck.

Duane Reade is also using plastic totes for piece-pick items. Previously, it had been loading the totes onto pallets, but the company switched to dollies, also manufactured by Gebhardt. The dollies have a load capacity of 900 pounds and can handle up to 12 totes. Empty dollies are designed to be stackable for ease of storage and transport back to the DC.

These types of rolling systems can dramatically reduce unloading time and make sense in retail outlets with a relatively small footprint and high customer traffic, such as Duane Reade. The carts are loaded according to store aisle, enabling store clerks to quickly replenish the shelves directly from the cart. Once unloaded, the carts and dollies are stacked and staged for the return trip to the DC.

Duane Reade ships out 1,800 dollies and 1,000 carts each day from its 500,000-square-foot distribution center in Maspeth, NY. Many of its stores are within 13 miles of the DC. It also operates a smaller facility in North Bergen, NJ.

While it had to invest in four strapping machines, the roll carts and dollies have eliminated the need for stretch wrap. There is additional labor at the distribution center, but Yuhasz says the company makes up for it with ergonomic and efficiency improvements at the store level.

"We've reduced our unloading time down to an hour or less and so it frees up employees at the store while increasing the utilization of drivers and trucks at the DC," he says. "There's also the safety factor. We were using hand jacks to unload the trucks, for example, but we designed a loading ramp so that the carts can just be wheeled off the truck and directly into the store. It's much safer for the drivers and store employees."

There has also been a significant decrease in product damage as well as damage to the insides of the trucks.

"We've lost a little cube in the truck, but it's well worth it," says Yuhasz. "We haven't had any complaints since we started using the roll carts. Our drivers and stores have told us they don't ever want to go back to the old way."