Spot truckload activity during the first full week of 2021 picked up where it left off at the end of 2020, with big increases in load and truck posts as shippers worked through freight that was backlogged during the holidays. 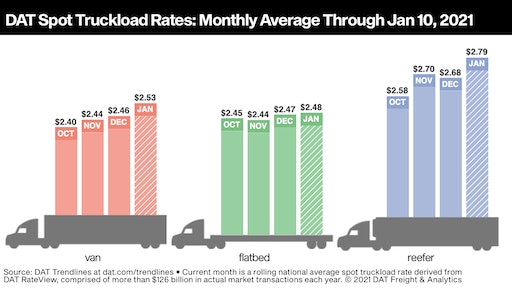 Spot truckload activity during the first full week of 2021 picked up where it left off at the end of 2020, with big increases in load and truck posts as shippers worked through freight that was backlogged during the holidays, said DAT Freight & Analytics, which operates the industry’s largest load board network and freight data analytics service.

These are national average spot rates for the month through Jan. 10. These averages are based on actual transactions negotiated between the carrier and the broker or shipper.

Van volumes swing higher to start the year: The number of loads moved on DAT’s top 100 van lanes by volume jumped 16% compared to the previous week on the strength of retail restocking and ecommerce. The average spot truckload rate fell on 59 of those 100 lanes, was neutral on 18 lanes, and increased on 23 lanes.

Shippers have been diverting containerized volume from the West Coast and Gulf Coast ports have been the beneficiaries: Houston container volumes are up 28% year over year.

Produce markets start to grow: Nationally, the average reefer load-to-truck ratio dropped from 15.6 to 12.3 last week as food shipments slow after post-holiday restocking. The number of loads moved on DAT’s top 72 reefer lanes by volume fell 10.4% week over week and is down 20.4% over the last four weeks.

The average rate was higher on 48 of those lanes, however, compared to the previous week. The top-risers were seasonal produce lanes as harvests continue in Arizona and California and imports hit port markets in the Northeast and Mexican border:

Flatbed demand remains strong: The national average flatbed load-to-truck ratio declined from 52.7 to 50.3 last week, well ahead of the monthly average of 40.2 in December and 13.3 in December 2019. Pricing on DAT’s top 78 flatbed lanes was higher on 27 lanes, lower on 21 lanes, and neutral on 30 lanes. Volume on these lanes fell 7.8% compared to the previous week.

The flatbed market experienced a boost from better-than-expected manufacturing data, with the U.S. manufacturing index rising slightly in December.