The Vector HE 19 unit is Carrier Transicold’s first North American transport refrigeration system to use the next-generation refrigerant R-452A exclusively. 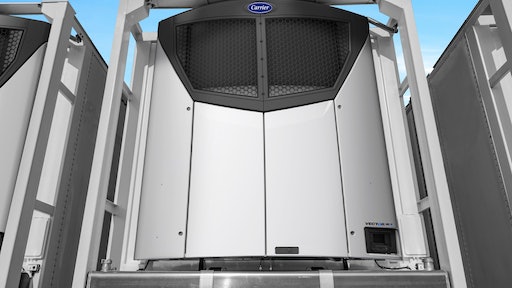 “The Vector HE 19 unit is trim and high performing, delivering more BTUs of cooling per hour per RPM than any model in the thin-profile class – as much as 36% more efficient than its competition,” said Bill Maddox, senior manager, Product Management, Carrier Transicold, a part of Carrier Global Corporation. “With its modern new design, the Vector HE 19 unit delivers 16% greater deep-frozen capacity and 20% more refrigeration capacity than its class competitor.”

The Vector HE 19 unit in Carrier Transicold’s first North American transport refrigeration system to use the next-generation refrigerant R-452A exclusively. Developed for lower environmental impact, R-452A has a global warming potential about half that of the refrigerant traditionally used in transport applications.

About 40% thinner than a traditional intermodal refrigeration unit, the Vector HE 19 unit is especially well suited for 53-foot domestic intermodal containers because it optimizes space utilization within, improving shipping efficiency over rail and highway. Up to 7% more cargo can be carried – 15 pallet rows, rather than 14.

As with other models in the Vector platform, the new unit features patented E-Drive technology developed by Carrier Transicold. With E-Drive technology, a high-output generator is direct-coupled to a diesel engine to power a uniquely all-electric refrigeration system. Intelligent controls automatically activate individual components, such as the compressor and fans, running only what it needs, precisely when needed, so components run less and last longer than traditional counterparts.

The Vector HE 19 unit has integrated electric standby, enabling the unit to be plugged into a power source when parked, eliminating emissions and noise from the refrigeration unit engine, conserving fuel and reducing operating costs. E-Drive technology delivers the unit’s full rated refrigeration capacity when on standby, unlike add-on standby systems that add weight and complexity without delivering full capacity.

The Vector HE 19 unit can be coupled with Carrier Transicold’s eSolutions telematics system for remote monitoring of system operation and container temperatures, and for enhanced capabilities, such as remote software updates, data downloads and system diagnostics.