The national average spot van rate hovered around $1.50 a mile during the week ending May 3, a four-year low despite improving freight volumes. 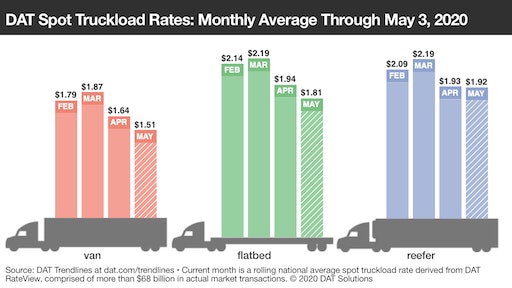 The national average spot van rate hovered around $1.50 a mile during the week ending May 3, a four-year low despite improving freight volumes, said DAT Solutions, which operates industry’s largest load board network.   Rates for refrigerated and flatbed loads hit their lowest points since early 2017.   The number of loads on the network was up 33% compared to the previous week as fresh produce began to move and some states prepared to relax their stay-at-home orders. Load-to-truck ratios were higher for all three equipment types, but a 4% reduction in capacity was a factor as more carriers sideline their equipment and wait for better pricing.

Spot rates slipped throughout April and entered May averaging $1.51 per mile for van freight, $1.81 for flatbed loads, and $1.92 for reefers.

The national average van ratio was 1.2 last week after nearly a month in the sub-1.0 range.

Load availability increased on 44 of DAT’s top 100 van lanes by volume, and rates were higher or neutral on 40 of those 100 lanes. Activity is picking up in states that have begun to reopen (Missouri, Tennessee, Texas, Georgia) and in produce regions (Florida, California, Texas, and Georgia again), as well as in Los Angeles, Houston, Savannah, Ga., and Elizabeth, N.J., as import traffic picks up.

Spot reefer volumes and pricing are riding an upward trend that’s typical for this time of year but are starting from historic lows.

The reefer load-to-truck ratio went from 1.7 to 2.3 last week and the number of available loads improved on 23 of DAT’s top 72 reefer lanes by volume. Produce activity is building in Florida and California. The number of posted loads out of Los Angeles jumped 8% compared to the previous week. Fresno and Ontario each gained 11%, while Miami was up 26%.

The national average flatbed load-to-truck ratio increased from 4.4 to 6.6 last week but it sits well below 22.4 from a year ago. Activity on 78 high-volume lanes was neutral at a time when construction, energy, manufacturing, and other flatbed markets should be accelerating.

At $1.79 a mile, the average spot flatbed rate is down 18% over the last two months. Volumes from Houston—the largest market for flatbed loads—improved 1.7% compared to the previous week but the average outbound rate dropped 6 cents to $2.01 a mile.

This summary’s month-to-date national average rates were generated using DAT RateView, which provides real-time reports on spot market and contract rates, as well as historical rate and capacity trends. The RateView database is comprised of more than $68 billion in freight payments. Actual rates are negotiated between the carrier and the broker.