The volume of loads moved, load-to-truck ratios, and the national rolling average rates for April fell again across all three equipment types during the week ending April 19 as truckers contemplate whether their next load will cover their running costs. 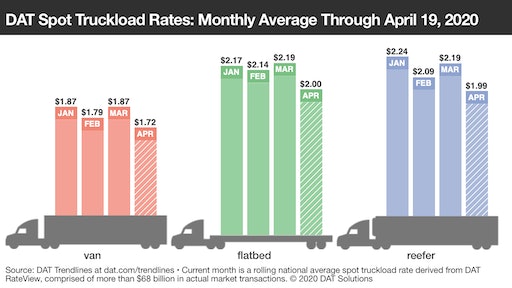 The volume of loads moved, load-to-truck ratios, and the national rolling average rates for April fell again across all three equipment types during the week ending April 19 as truckers contemplate whether their next load will cover their running costs. Spot truckload rates have declined rapidly and across the board on high-volume lanes since the third week of March and now rival levels from 2016 when the country was in a manufacturing recession. DAT forecasting models indicate that spot rates are expected to flatten in May, helped by seasonal trends like produce harvests. Easing personal-distancing restrictions around certain economic sectors and regions may help, too, but they’re not necessarily dialed into the models.

These rates are rolling averages for the month and they include fuel. Pricing has weakened throughout April as volumes have declined. Current averages will be lower.

Truck posts fall 9%: After an increase last week due in part to contract carriers searching for spot loads, the number of trucks posted to DAT load boards fell 9%. The number of posted loads was down 12% week over week, and the imbalance in supply and demand continues to punish truckers.

Van market flattens: The national average van load-to-truck ratio ticked up from 0.8 to 0.9 last week. A low van ratio isn’t unusual this time of year but we’re talking about a sub-1.0 number, meaning there are more trucks than loads on the board.

No relief from low rates: Rates were lower on 95 of the top 100 van lanes by volume, and the number of loads moved fell by nearly 9%. Compared to March, the average van rate in April is down almost 7.5%. Dry van spot rates have given back gains from March when retail inventories were being replenished at an accelerated pace.

Reefer trends are no better: The national average reefer load-to-truck ratio dipped from 1.5 to 1.3. Of the 72 top reefer lanes on the DAT network, rates were lower on 69 lanes: Lakeland, Fla., to Chicago as the only lane to register an increase.

Crucial weeks ahead: The next two to four weeks are crucial for small carriers and independent operators, which provide vital capacity for fruit and vegetable producers. If many can’t financially survive into produce season, or rates are too low to operate, or crop yields are poor, the impact on the ag and food supply chains could be significant.