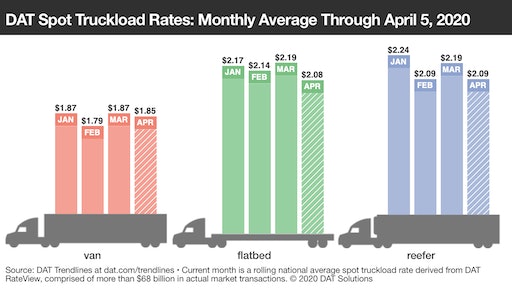 The number of posted loads fell 39% compared to the previous week.

At the same time, load-searching volume skyrocketed. The number of posted trucks on the spot market increased 13% week over week, the largest such gain in available capacity so far this year.

Reefer rates retreat: Reefer rates have given back a good portion of their March gains, and it seems more likely that reefer rates will slip below year-ago levels in the next seven to 10 days until the typical seasonal uptick toward the beginning of May.

Borderline decline: There’s still plenty of reefer freight to be found in the Mexican border markets of McAllen, Texas, and Tucson, Arizona, but average rates trended down last week:

Produce picking up: Reefer rates were higher on lanes originating in the Midwest and California, plus a few lanes out of Florida: