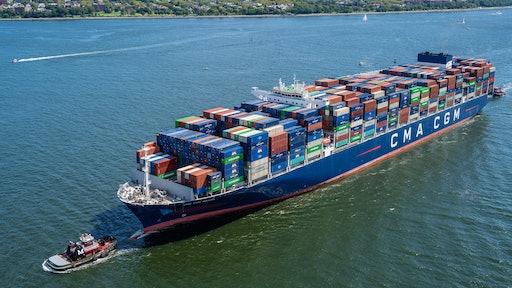 On the heels of reporting all-time record container volumes, the Port of Savannah welcomed the CMA CGM Brazil, the largest ship to ever call the U.S. East Coast with a capacity of 15,072 twenty-foot equivalent container units (TEUs).

"As the largest ship ever to call the East Coast moves 5,600 TEUs on and off the largest single container terminal in North America, it is clear that our efforts to expand capacity and reach are taking hold," said GPA Executive Director Griff Lynch. "Frankly, we weren't expecting to experience record volumes during this pandemic, but thanks to our employees, the ILA and all of our partners who pulled together and our customers who believe in us, this announcement is possible today."

"The numbers cement Savannah's position as one of the key hub ports in global trade," said GPA Board Chairman Will McKnight. "The combination of big ship efficiency, our landside infrastructure and the soon-to-be-completed harbor deepening make Georgia the logical choice for American farms and factories competing in the global marketplace. The Port of Savannah stands ready to support the nation's exporters as our economy regains momentum."

The trend of cargo moving to Savannah has been accelerated by the pandemic and a greater reliance on e-commerce, along with the need for deeper water, expansive container facilities and taller cranes to handle larger vessels, infrastructure Savannah has been putting into place for decades.

"Our success in August was due in part to retailers replenishing inventories and preparing for the holidays," Lynch said. "The longer-term trend of Savannah's increasing market share is the result of the port's fundamental strengths - a central location, more space and transformative infrastructure investment both on- and off-terminal to accommodate growth."

The Savannah market now features 74.4 million square feet of industrial space with another 5 million square feet under construction. The Savannah Harbor Expansion Project, which will deepen the river to 47 feet at low tide, is now 75 percent complete. The Mason Mega Rail Terminal, which will double the Port of Savannah's rail capacity to 2 million TEUs annually, is now 50 percent operational.

"Harbor deepening, rail expansion and new distribution and industrial real estate space added in the past year are all reasons why the center of gravity in American logistics is shifting toward Savannah," added McKnight.

With nearly 10,000 feet of contiguous berth space, the longest single container terminal dock in North America, GPA is scheduled to work six other vessels simultaneous to the Brazil on Friday. The CMA CGM Brazil, built in 2020, is more than 1,200 feet long - or four football fields - and over 167 feet wide.

"The sight of this colossal ship makes perfectly clear the benefits America will gain from the Savannah Harbor deepening," said Col. Daniel H. Hibner, Commander of the U.S. Army Corps of Engineers Savannah District. "The Savannah Harbor Expansion Project, now nearly complete, will boost the economy at a critical time and will have broad impacts for Georgia, South Carolina and throughout the Southeast."