Port of Wilmington Searches for Ways to Go Deeper

The Port of Wilmington is funding a study to look for ways to make the port more accessible for large container ships. 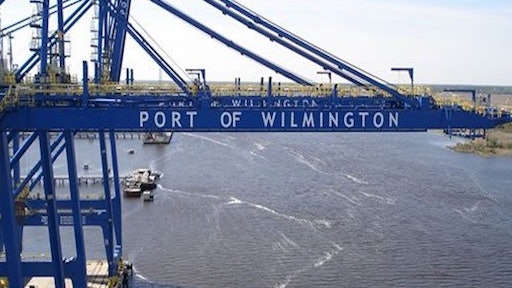 The port of Wilmington might get deeper as the N.C. State Ports Authority is launching a $6 million feasibility study seeks to make ports more accessible to the ever-large container ships, Stars News Online reports. The port will pay for the study, and it is expected to wrap up in spring 2019.

Ports across the country are improving their infrastructure, but it won't matter much if ships aren't able to get there.

According to Stars News Online, the Wilmington feasibility study will look at options to enhance the harbor to allow deep-draft vessels to navigate the port. A key to that will be the 26-mile-long channel that ships use to get to the port. As of right now, the port is unsure of how deep they would dredge the channel.

Attracting vessels to your port is a competitive game, and Wilmington is surrounded by bigger and busier ports, Stars News Online reports. The port will need to use its size as a marketing tool in order to attract vessels.

The shipping channel to Wilmington is currently dredged to 42 feet, and the port is arguing to dredge deeper to meet the requirements of the latest generation of container ships.

However, other ports have had the same idea and are already deepening their channels. Star News Online reports that Hampton Roads in Virginia are deepening their water to 55 feet, and the Port of Savannah is nearing the completion of the deepening of its channel.

Any new dredging can come with a hefty price tag, though. However, the port will have strong in-state political support to dredge.

Star News Online reports that Gov. Roy Cooper has been a vocal proponent of the port and its role as an international conduit for the state's business and trade. The General Assembly has also consistently backed the ports and also provided $45 million for capital improvements.