OCEMA applauded the efforts of the ports and marine terminal operators that have announced that they will provide VGM weighing services on behalf of U.S. exporters and encourages ports and terminals across the country to adopt similar approaches. 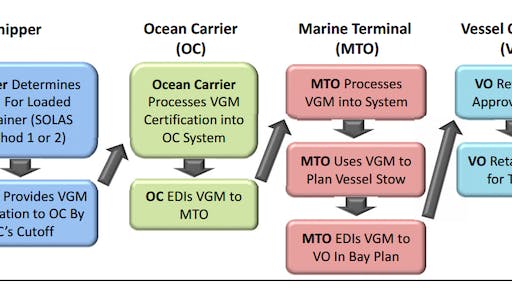 The Ocean Carrier Equipment Management Association (OCEMA), which represents the majority of the ocean carriers, announce that it supports the use of on-terminal scales to obtain the Verified Gross Mass (VGM) of containers, as required by the Convention on Safety of Life at Sea (SOLAS), and has been working to develop a common terminal weighing approach. OCEMA applauded the efforts of the ports and marine terminal operators that have announced that they will provide VGM weighing services on behalf of U.S. exporters and encourages ports and terminals across the country to adopt similar approaches.

Under the OCEMA terminal weighing approach concept, U.S. ports and marine terminal operators could weigh containers moving through their truck gates and provide the gross container weights directly to ocean carrier stowage planners. VGM obtained in this way would be forwarded by the marine terminal operator on the shipper’s behalf directly to the ocean carrier for use in vessel stowage planning.

Shippers availing themselves of this option would not be required to provide a signature to the ocean carrier for each container, but would acknowledge that the use of on-terminal scaling provides a VGM, OCEMA noted. Earlier this week, OCEMA received confirmation from the U.S. Coast Guard that the processes used by terminals to obtain gross container weights, and which serve as the foundation for the OCEMA terminal weighing approach, are compliant with the SOLAS mandate.

Accordingly, OCEMA will be amending its best practice to incorporate a terminal weighing approach. While this is expected to alleviate much of the confusion surrounding VGM and simplify the process for most stakeholders, there may be operational constraints that require different processes for determining and transmitting VGM. In cases where the terminal weighing approach is not feasible, OCEMA will continue to evaluate ways to achieve VGM compliance.