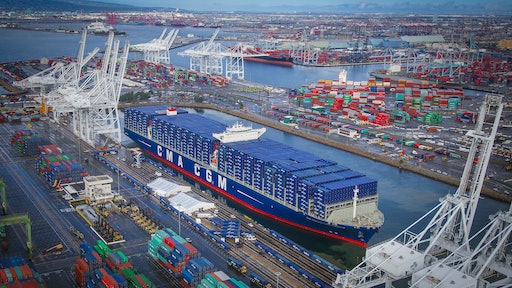 The arrival of the biggest ship to visit North America, the 18,000-TEU CMA CGM Benjamin Franklin, catapulted the Port of Long Beach to its highest cargo volume for the month of February and extended cargo growth for an eighth consecutive month.

The arrival of the biggest ship to visit North America catapulted the Port of Long Beach to its highest cargo volume for the month of February and extended cargo growth for an eighth consecutive month. The port saw strong gains last month by moving 561,412 TEUs (20-foot equivalent units), a 35.9 percent increase over the same month last year.

For February, imports were up 44.7 percent to 295,870 TEUs. Exports increased 11.1 percent to 123,010 TEUs, while empty containers rose 45.5 percent to 142,532 TEUs. Empty containers are shipped back overseas to be refilled with goods for import. More than 1 million TEUs have moved through the Port of Long Beach in the first two months of 2016. (TEUs are the standard industry measure for container cargo.)

“In February, we showed the world we can handle today’s megaships by inaugurating the 18,000-TEU CMA CGM Benjamin Franklin,” said CEO Jon Slangerup. “The future of big ships is here and our customers are choosing Long Beach because we offer the fastest, most efficient way to get cargo from Asia to the rest of the United States.“

The gains in February are also explained by several other factors. The strength of the U.S. dollar continues to drive demand for imports, but at the same time slows exports by making them relatively expensive overseas. The Lunar New Year holiday began Feb. 8, closing many Chinese businesses for a week or more, so U.S. importers ordered extra products ahead of the lull that will come to the Port in early March.

With an ongoing $4 billion program to modernize its facilities this decade, the Port of Long Beach is building the “Port of the Future” by investing in capital and service improvements that will bring long-term, environmentally sustainable growth, and maintain its competitive advantage as the fastest route from Asia to anywhere in North America.

GE Transportation and Port of Long Beach Team Up

Powered by the latest technology, drayOS serves as an end-to-end operating system enabling drayage carriers to automate time-consuming back-office operations and focus on the growth of their businesses.
PortPro Technologies
October 23, 2020
Follow Us