More spot truckload shipments moved in October than in any month since January 2015. 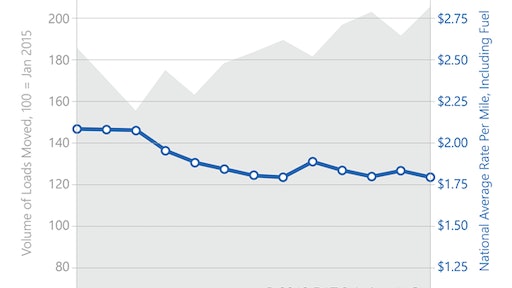 October saw more spot market truckload shipments than any other month since January 2015, according to the DAT Truckload Volume Index, which reflects changes in the actual number of spot market loads moved each month. While volumes continued to climb for dry van, refrigerated (reefer) and flatbed freight, truckload rates have not kept pace.

There was plenty of capacity to handle the increased volume, so truckload rates fell in October compared to August. A rush of demand in the final few days of the month created momentum for higher prices in November, though.

“Shippers were active in advance of the holidays,” says Peggy Dorf, Market Analyst with DAT Solutions. “And the low rates are effectively attracting more volume from contract carriers to spot transportation providers, especially during the busy season.”

Van rates averaged $1.80 per mile in October, including fuel. That was a 5-cents drop compared to the prior month, and 28 cents below the October 2018 average. Volume was up 7.3 percent compared to September.

Apple and other fall harvests led to a peak in reefer traffic in October, with a 9.2 percent increase month over month. The average rate was $2.12 per mile, 4 cents lower than the September average and 30 cents lower than October 2018.

Flatbeds moved 3.4 percent more loads in October compared to September, but fell just short of August’s peak demand. Flatbed rates averaged $2.27 per mile, down 3 cents from September and a 20-cent drop from October 2018.

“At this time last year, spot rates began to recede from record-high pricing,” Dorf added. “So year-over-year comparisons should become more favorable – or at least less negative – through the remainder of this year and into Q1.”