ICTSI Oregon was award $93.6 million by a federal jury after it was found that dock workers union sabotaged shipping traffic, causing productivity to drop through years of labor slowdowns and stoppages. 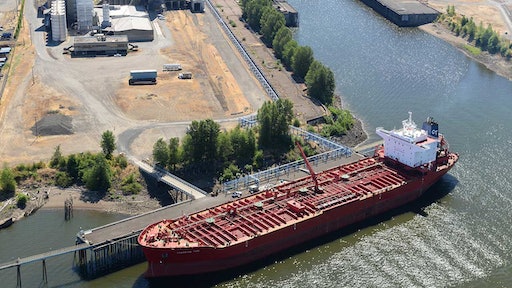 ICTSI Oregon was award $93.6 million by a federal jury on Monday, after it was found that dock workers union sabotaged shipping traffic, causing productivity to drop through years of labor slowdowns and stoppages.

The Oregonian reports that ICTSI Oregon signed a 25-year lease in 2010 to operate Terminal 6, but ended up leaving the port in March 2017 after slowdowns. The company alleges that the International Longshore and Warehouse Union and its Local 8 chapter encouraged its departure.

The company's exit marked the end to the frequent use of Oregon's only container terminal accessible by large ocean-crossing cargo vessels. According to The Oregonian, the terminal now mostly runs as a truck-to-train operation.

The verdict comes after a two-week civil trial.

“The ILWU went too far. They have given that middle finger to the port, to the National Labor Relations Board and to its own community, and you are here to hold them accountable,’’ ICTSI’s lawyer Amanda T. Gamblin told jurors in her closing argument.

The union's lawyer alleges declines in productivity at Terminal 6 resulted from market forces, geographic limitation and dismissive management that caused a demoralized workforce.

“ICTSI is trying to use the ILWU as its piggybank,” attorney Susan J. Harriman argued on behalf of the union. “It decided to make its money from this lawsuit, instead of making Terminal 6 a success.’’

The union and ICTSI reportedly began clashing shortly after the company began running the terminal. Workers claimed that the company should give them jobs plugging, unplugging and monitoring refrigerated containers, taking reefer work away from an electricians union. While ICTSI argued that the union deliberately disrupted work to get those jobs by driving trucks slowly, taking extensive time loading containers, showing up late and delaying crane workers from getting started.

A judge previously determined that the union was guilty of unlawful labor practices from May 21, 2012 through Aug. 13, 2013. The current jury was asked to decide if those unlawful practices continued through March 2017 and it damages should be awarded for losses suffered.

After deliberating, jurors found that the practices did continue and awarded the damages, The Oregonian reports. It also found that the union and local chapter were jointly liable, with ILWU responsible for 55% of damaged, and Local 8 for the other 45%.

However, a federal judge has agreed to delay the award, allowing both sides in the case to argue whether the amount should stick or be reduced, The Oregonian reports.

The union has said that the $93.6 million award could cause significant damages to the union, potentially bankrupting it altogether. In addition, lawyers also argue that the award isn't supported by the evidence presented in court and plans to seek a new trial.

The terminal's lawyers have objected to the delay, saying that the facts found by the jury are "beyond dispute."

“The ILWU Defendants long knew their unlawful labor actions were causing ICTSI damages. And yet they now ask this Court to weigh their 'financial burdens’ more heavily than the burdens on the business they destroyed,’’ wrote attorney Michael T. Garone for ICTSI. “ILWU is a longtime and serial offender of federal labor law. Judgment upon the jury verdict should enter in the regular course—which is to say, 'promptly.’ ”

Still, U.D. District Judge Michael H. Simon believes the case warrants a "modest delay," according to The Oregonian and that he will hold off entering the judgement pending the resolution of post-trial motions.

“The amount of damages found by the jury is quite high and may result in the bankruptcy of a union that traces its beginnings to at least 1933 and arguably into the 19th century,’’ Simon wrote in an order Friday.