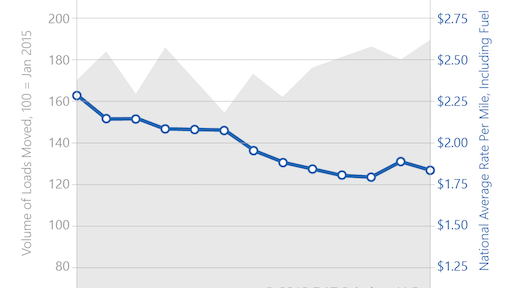 Shipments of dry van freight, the most common type of truckload shipment, rose 6.8 percent in July compared to June, according to the DAT Truckload Volume Index, which reflects the change in the actual number of spot market loads moved each month.

“July often marks the beginning of a downward turn for truckload rates,” Dorf explains. “That has less to do with volume than the fact that, after the close of Q2 and the end of the Fourth of July holiday, shippers feel less urgency to get deliveries made by a specific date.”

While those trends may have been predictable, the announcement of new tariffs on Chinese imports beginning Sept. 1 could disrupt typical late-summer freight patterns.

“There was an uptick in activity at the end of July, and that could carry over into August,” said Dorf. “Shippers may rush to move imports ahead of the new tariffs, which could disrupt what would normally be the summer doldrums for pricing.”

The national average van rate in July was $1.84 per mile, which includes fuel surcharges. While that was a 5-cent decline from the June average, it was otherwise the highest monthly average for vans since March. Year over year, the national average rate was 43 cents lower than the historic highs set in July 2018, even though volume this July was up 13 percent compared to last year.

Harsh weather curtailed and/or delayed many produce harvests this year. That disrupted refrigerated (“reefer”) shipments, but improved yields out of California contributed to an 8.7 percent increase in reefer volume from June to July. Reefer rates averaged $2.19 per mile nationally, a 6-cent drop from June but otherwise the highest monthly average since February. The July 2019 average was down 41 cents from July 2018, even though volume increased 12 percent compared to last year.

Flatbed volume also rose in July, up 6.6 percent month over month, although the national average flatbed rate fell to $2.27 per mile, 3 cents below the June rate and 50 cents below the sky-high average of July 2018. Compared to last year, flatbed volume was up 18 percent.

“Truckload pricing followed normal seasonal patterns in July, despite uncertainty in some segments of the economy,” says Dorf. “Moving forward, the new tariffs are a wild card, on top of the potential risks to supply chain operations during hurricane season.”

On average, Union Pacific moves a ton of freight 444 miles on a single gallon of diesel fuel.
Union Pacific
April 4, 2020

The deal adds 35 refrigerated trailers to the AMX fleet, helping the company deliver against its goal to expand its service offerings to a wider customer base and become the most prominent freight company in the Southeast.
Alabama Motor Express
March 25, 2020
Follow Us