With most of the country in a heat wave, spot truckload rates wilted during the week ending July 21. 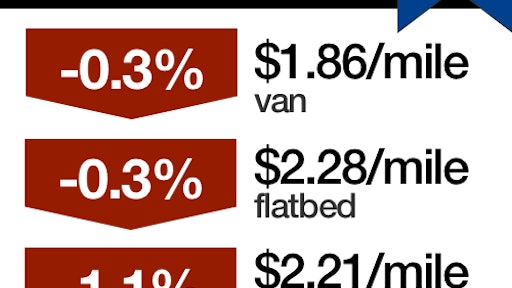 With most of the country in a heat wave, spot truckload rates wilted during the week ending July 21, said DAT Solutions, which operates the industry’s largest network of load boards.

Load-posting volume on the DAT network slipped 16 percent while the number of trucks posted rose 3 percent compared to the previous week. National average spot rates were lower but still within mid-July expectations.

For truckers, pricing power slumped in most major markets, including Los Angeles ($2.27/mile, down 4 percent over the past four weeks) and Atlanta ($2.07/mile, down 5 percent over four weeks). Rates were higher on just 20 of the DAT Top 100 van lanes, and some of the stronger gains were on lanes where rates are generally low anyway:

Van volumes and rates are sliding in the Southeast. Houston averaged $1.77/mile, 3 cents lower than the previous week. With Texas oilfield production down, demand for van freight in outlying markets has slowed.

Reefer volumes and rates continue to fall, with the load-to-truck ratio dropping from 3.8 to 3.2 last week. Volumes increased slightly in the Midwest but not enough to make up for declines in the rest of the country. Rates out of Sacramento and McAllen, Texas, held up better compared to most markets, and two Midwest lanes stood out: