Spot market rates for dry van and refrigerated shipments in June were the highest since January. 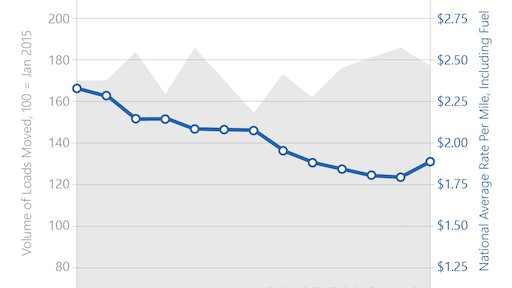 Spot market rates for dry van and refrigerated (reefer) shipments in June were the highest since January, according to DAT Solutions, which operates the largest truckload freight marketplace in North America.

The uptick in pricing came as truckload capacity was more constrained in June.

“The annual Roadcheck inspection blitz limited truck availability in the first week of the month,” says Peggy Dorf, Market Analyst with DAT Solutions. “The urgency to move shipments before the close of Q2 sustained those price increases through the end of the month.”

The DAT Truckload Volume Index showed a 5 percent decline from May to June, a common trend in recent years.

The national average van rate for June was $1.89 per mile, including fuel surcharges, which was 10 cents higher than May’s average. Year over year, the national rate was 43 cents lower, but the June 2018 average was also the highest van rate ever recorded.

The national reefer rate rose to $2.25 per mile, another 10 cent increase from May. The June reefer average was 46 cents short of the record set in June 2018. Reefer volume fell month-over-month for the third year in a row, as agricultural producers continue to grapple with disruptions due to unpredictable weather. Reefer load counts fell 5 percent compared to May. Compared to June 2018, reefer volume was up 1.3 percent.

The price for flatbed shipments averaged $2.30 per mile in June, 3 cents over the May average and 52 cents below another record rate set in June 2018. Volume dipped 2.4 percent compared to May, a seasonal trend that also mirrored the past two years. The volume of flatbed loads added 9 percent compared to June 2018.

“June is often considered a peak month for the spot market, but that’s truer for rates than volumes,” says Dorf. “We expect spot market volumes to gain strength in the second half of this year, although rates probably will not rebound to 2018 levels.”