Better weather combined with a 4.2 percent increase in the number of available loads pushed spot truckload freight rates higher during the week ending May 5. 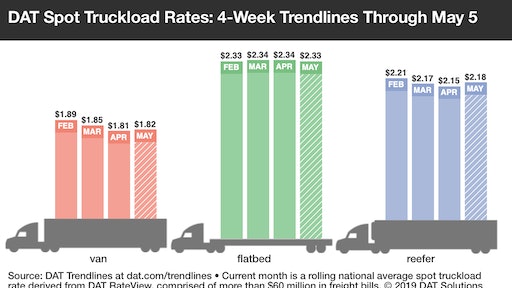 Better weather combined with a 4.2 percent increase in the number of available loads pushed spot truckload freight rates higher during the week ending May 5, said DAT Solutions, which operates the DAT network of load boards.

The number of available trucks, which has steadily increased in recent weeks, rose 1.6%.

National Average Spot Rates Through May 5

The price of fuel was $3.17 per gallon as a national average, nearly unchanged from the previous week.

Individual lane rates are trending up as rates increased on 53 of the top 100 van lanes last week, the first time in six weeks that more lanes were up than down. The national average van load-to-truck ratio rose from 1.6 to 1.8 last week.

One caveat: The load-to-truck ratio from Charlotte peaked around April 29 to May 1 and declined through the first week of May. It remains to be seen whether this is an end-of-month surge or the beginning of a sustained upward trend.

The national average reefer load-to-truck ratio popped up from 2.5 to 2.9 last week, a sign that produce-shipping season in the Southeast is stepping into higher gear.

California has been slower than usual, with freight volumes down nearly 3 percent compared to the previous week. The wet winter and spring delayed planting in many regions but should deliver strong harvests in the coming weeks, including substantial numbers of cherries and table grapes.