While the number of truck posts fell 4 percent, there was enough capacity to cover demand and national average spot rates ended the week at or below their averages for the month of March. 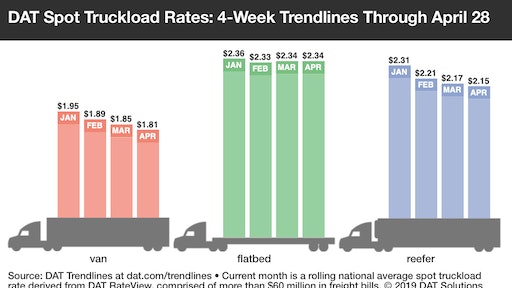 It’s typical for spot truckload freight volumes to get a bounce during the week after a holiday. Sure enough, the number of posted loads increased 1 percent during the week ending April 28, according to DAT Solutions, which operates the DAT network of load boards.

While the number of truck posts fell 4 percent, there was enough capacity to cover demand and national average spot rates ended the week at or below their averages for the month of March.

The price of fuel crept up 2 cents to $3.17 per gallon as a national average. That’s a 10-cent increase during the month of April.

Average rates increased on just 37 of the top 100 van lanes last week. The good news is that volumes—loads actually moved—are higher than they’ve been at this time in the past three years. The national van load-to-truck ratio rose from 1.3 to 1.6.

Markets to watch: Five of the top six van markets had higher freight volumes, with Houston and Stockton, California, up by double-digit percentages compared to the previous week. Los Angeles factored into several important lanes:

Rates declined on 41 of the top 78 reefer lanes last week and the national average reefer load-to-truck ratio slipped from 2.6 to 2.5. But there’s reason for optimism.

Markets to watch: All along the Atlantic Coast from Miami to Savannah, load-to-truck ratios were elevated as produce harvests pick up. Demand is building in north and central Florida: Lakeland had about 20 more reefer loads available. The average rate from Lakeland to Charlotte increased 19 cents to $2.04/mile.