The national average spot refrigerated freight rate increased for the third straight week as grocers stock shelves ahead of the Thanksgiving holiday. 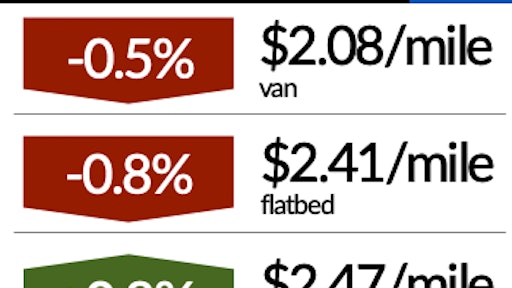 The national average spot refrigerated freight rate increased for the third straight week as grocers stock shelves ahead of the Thanksgiving holiday, said DAT Solutions, which operates the DAT network of load boards.

The average van rate fell during the week ending Nov. 11, while the flatbed rate continued its seasonal decline.

Demand for reefer and van capacity is building as the calendar year draws to a close. The number of available loads on DAT load boards jumped 6.7 percent while the number of trucks fell 2.2 percent last week.

One trend to watch: the spot van market in mid-November is generally weaker this year compared to a year ago. Shippers appear to be making a concerted effort to reduce spot-market exposure by increasing the use of contract carriers, rail intermodal, and overall better planning now that the ELD mandate is firmly in place.

On many of the busiest reefer lanes, rates increased by double digits compared to the previous week to hit the upper $3/mile range.

In California, where record imports have given spot rates a boost, volumes on intrastate lanes were lower, possibly due to supply chain disruptions caused by wildfires in the state.