Spot refrigerated freight rates rebounded during the week ending Nov. 10 as volumes build ahead of the Thanksgiving holiday 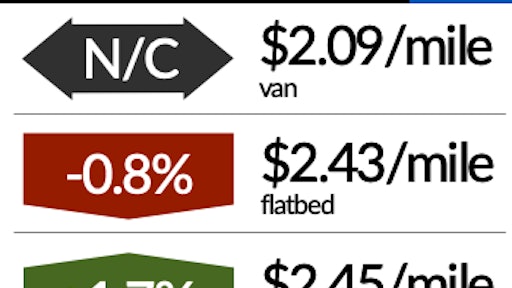 Spot refrigerated freight rates rebounded during the week ending Nov. 10 as volumes build ahead of the Thanksgiving holiday, said DAT Solutions, which operates the DAT network of load boards.

Meanwhile, a “bubble” of van freight is moving east from Los Angeles, where ports have seen an influx of Asian imports in recent weeks.

Load-to-truck ratios represent the number of loads posted for every truck posted on DAT load boards.

In the Midwest, reefer volumes sharply decreased in two major markets: Chicago ($2.96/mile, unchanged) and Grand Rapids, Michigan ($3.37/mile, up 1 cent). It’s a sign that apple-shipping season is winding down and rates are about to go soft.

Van Trendlines: The number of van load posts on DAT load boards dipped 5 percent while truck posts increased 4% last week. Rates from Los Angeles ($2.79/mile average, up 10 cents last week) are up 8 percent over the past month, driven by imports from Asia.

A surge of van freight into California ports is moving west and showing up as rising outbound volumes from Chicago, Columbus, and Memphis. There appears to be ample capacity, which is holding rate increases to minimal levels, if they move up at all. However, strong rates from Los Angeles persist: