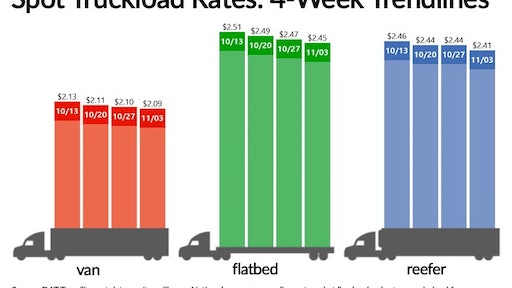 While capacity tightened last week, it’s up considerably month over month and year over year. During October, the number of available trucks on the spot market was 25 percent higher compared to September, and up 37 percent compared to October 2017.

Van Trendlines: The number of van load posts on DAT load boards jumped up 7 percent while truck posts dropped 4 percent last week. Rates were higher on 39 of the top 100 van lanes; 56 lanes were lower and five were neutral.

Los Angeles ($2.66/mile average, up 7 cents) keeps driving demand. The load-to-truck ratio was 12.2 last Friday and rates on two outbound lanes were especially strong: Los Angeles to Dallas ($2.51/mile) and Los Angeles to Denver ($3.21/mile) were both up 14 cents compared to the previous week.

Atlanta ($2.22/mile average, down 2 cents) may be the next market to reverse course, as volumes were lower compared to the previous week but firming up. Van demand and rates were lower virtually everywhere else.

Fuel: The price of diesel fell 1 cent to $3.34/gallon compared to the previous week. Spot rates include a fuel surcharge portion.