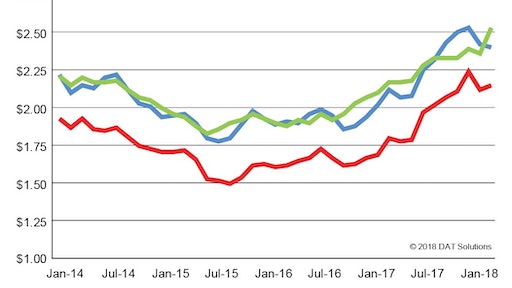 Spot truckload freight availability rebounded in March, setting a new 20-year record for the DAT North American Freight Index. The 38 percent increase in volume, year over year, was due to extraordinary demand for flatbed equipment to move industrial cargo for energy and construction.

The Freight Index, a monthly measure of demand for spot market freight, is published by DAT Solutions, which operates North America’s largest load board marketplace.

Flatbed freight rates also set a record in March, at $2.53 per mile, including fuel. Flatbeds got a 16-cent increase month over month, and were paid a full 50 cents more than the average for March 2017.

Rates continued to rise sharply through the first week in April, which is not typical after the close of a fiscal quarter. Van rates are on track to exceed their previous record high of $2.24 per mile, achieved in January, and flatbed rates continue to reach new heights as well. Reefer rates are lagging, however, because spring produce harvests have not reached their peak.

“Economic growth, particularly in the energy sector, supports heightened demand for truckload transportation, and capacity is not keeping up with that demand,” said DAT industry analyst Mark Montague. “Unless something changes, we can expect rates to continue rising at least until the end of June.”

Established in 1978, DAT operates a network of load boards serving intermediaries and carriers across North America. For more than a decade DAT has published its Freight Index, which is representative of the dynamic spot market.

Referenced rates are the averages, by equipment type, based on $45 billion of actual transactions, as recorded in DAT RateView. Reference rates per mile include fuel surcharges, but not accessorials or other fees. The DAT Freight Index reflects load posting volume on the DAT network of load boards, and 100 on the Index represents the average monthly volume in the year 2000. Additional trends and analysis are available at DAT Trendlines.