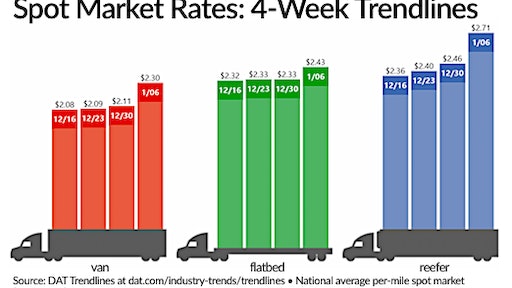 The number of available loads increased 27 percent, in line with expectations when a full workweek follows a holiday-shortened one. However, the number of trucks posted to DAT load boards was up just 7.4 percent, and the imbalance pushed load-to-truck ratios up for all three equipment types:

In the van market, load posts jumped 26 percent, but truck posts were up only 6 percent, as many truckers were still taking time off. The national average van rate was $2.30/mile, up 19 cents compared to the previous week.

Houston ($2.02/mile, up 11 cents) was the top market for outbound van volume and most of the top 100 van lanes saw higher rates. A sampling:

Van markets where rates were down included Los Angeles ($2.86/mile, down 11 cents) and Dallas ($2.07/mile, down 7 cents). There were big drops on other van lanes that have been otherwise busy:

Demand for refrigerated trailers peaked at year-end, but cold weather in parts of the country has kept prices at record levels where reefer trailers are used to keep freight from freezing.

Rates are derived from DAT® RateView, which provides real-time reports on prevailing spot market and contract rates, as well as historical rate and capacity trends. For the latest spot market load availability and rate information, visit dat.com/industry-trends/trendlines, or join the conversation on Twitter with @LoadBoards.

Steps for Navigating the Winter Chill