Survey: $3.00 Price of Diesel Will Cause Fleets to Seek Fuel-Saving Technologies 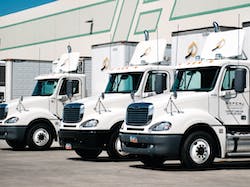 A recent University of Michigan team survey of U.S. fleet managers on fuel usage, fuel economy and fuel-saving technologies turned in some interesting results, according to phys.org, including the fact that managers of the smallest fleets said that a $3.50 price of diesel per gallon would make them seek out fuel-saving technologies, while managers of all other fleets (and all fleets overall) said the price point would be $3.00.

The survey results, released in conjunction with the American Transportation Research Institute, include responses from nearly 100 heavy-duty fleet managers who operate more than 114,500 truck-tractors and haul 9 billion tons of freight across 1.8 billion miles annually.

Other results the researchers found include:

New standards from the EPA and the National Highway Traffic Safety Administration require that emissions reductions begin in 2017.

"Reducing transportation-related emissions will likely gain even more importance in the coming years, as the push for greater greenhouse gas reductions comes not only from regulators within the U.S. but also on an international level," said Brandon Schoettle, project manager at the U-M Transportation Research Institute and lead author of the new report. "And as the economy improves, the challenge increases for heavy truck fleets because people start buying more products and more of them need to be moved around."