September data is once again signaling that overall shipment volumes (and pricing) continued to be weak in most modes, marking the nineteenth straight month of year-over-year decline. 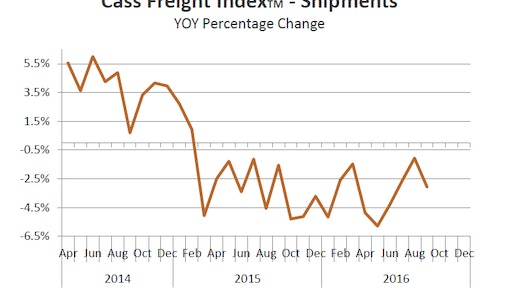 Data within the Index includes all domestic freight modes and is derived from $25 billion in freight transactions processed by Cass annually on behalf of its client base of hundreds of large shippers.

After offering what was called "less bad" results in August (only down 1.1% YoY and up 0.4% sequentially), the recently released Cass Freight Index shipments data in September is once again disappointing providing hindsight that August only gave us "false hope."

September data is once again signaling that overall shipment volumes (and pricing) continued to be weak in most modes, with increased levels of volatility as all levels of the supply chain (manufacturing, wholesale, retail) continue to try and work down inventory levels.

There have been a few areas of growth, mostly related to e-commerce, with lower levels of expansion being experienced in transit modes serving the auto and housing/construction industries. All of this added up to lower shipment volume in September on a YoY (Year-over-Year) basis, marking the 19th straight month of year-over-year decline. Bottom line, the Industrial Recession in the U.S. that began in March of 2015 continues to weigh on overall volumes.

Spot Truckload Rates Trending Up During Week Ending May 20