As the wider, deeper canal nears its debut next month, ports that stand to gain aren’t ready to handle the bigger ships that will come through. 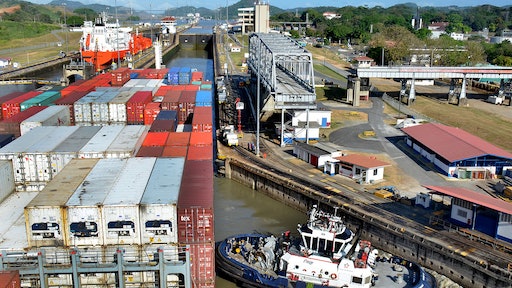 Another possible drag on new canal traffic is the slumping global economy, which has pummeled shipping rates and left many cargo ships idle.

The $5.2 billion expansion of the Panama Canal was expected to make U.S. East Coast ports more competitive for cargo ships carrying televisions, tennis shoes and other products from Asia, according to Reuters.

But those hopes are fading. As the wider, deeper canal nears its debut next month, ports that stand to gain aren’t ready to handle the bigger ships that will come through.

The harbor in Charleston, S.C., for instance, is too shallow. The Bayonne Bridge outside New York and New Jersey terminals is too low.

Delayed port fixes, a freighter glut and a wobbly global economy mean that, in the short term, the benefits of the expanded waterway along the U.S. East Coast will be marginal at best, say shipping executives and analysts.

Hopes were much higher when the project started nearly a decade ago, amid cheerleading from U.S. ports officials.

“There was a lot of hyperbole,” said Lawrence Gross, a partner at FTR Transportation Intelligence. “It will have an impact, but it’s not a game changer.”

A new lane will double the capacity of the 48-mile shortcut between the Atlantic and Pacific oceans. New locks will lift freighters carrying up to 14,000 standard, 20-foot-long cargo containers – nearly three times as many as ships fit now.

U.S. port officials embraced the project and promised to make changes to accommodate bigger ships. Traffic already had been shifting east for several reasons, including labor disputes at the twin ports of Los Angeles-Long Beach. East Coast ports’ share of containers from Asia to the U.S. rose to 31 percent in 2015 from 26 percent in 2012, according to Drewry Maritime Research. The competition centers on cargo bound for the middle of the country. It has been cheaper for retailers as far east as the Ohio Valley to bring goods through West Coast ports. The new canal is expected to push the battle line west - just how far depends on energy prices, canal tolls, infrastructure investments, economic growth and other variables.

Under the rosiest scenario for the Panama Canal, it would help East Coast ports handle goods for retailers nearly as far west as Chicago. Jim Newsome, CEO of the South Carolina Ports Authority, recently predicted the East Coast's share would hit 50 percent within a couple years. A Boston Consulting Group analysis issued less than a year ago forecast East Coast ports could reach parity with West Coast terminals by 2020. But that looks unlikely now, said Peter Ulrich, one of the authors of that report. "In the longer term, the theory is sound," Ulrich said. "But in the short term, I would be extremely cautious."

The impact on the canal itself is less clear. The Panama Canal Authority did not respond to requests for comment. Some shippers said they were eager to use the expanded waterway to get more consumer goods to Latin American ports.

The Panama Canal was not the only bottleneck between Asia's factories and East Coast markets. The Bayonne Bridge spanning the tidal strait between New York and New Jersey is a big one.

Ships plying the East Coast visit more than one port, but all stop in New York, which accounts for 40 percent of the container traffic for the Eastern United States. If a ship cannot unload part of its cargo in New York, it does not make economic sense for it to travel to the East Coast at all, shippers said. “New York is one of the main gateways to the Midwest and eastern Canada,” said Angel Mavares, head of marine operations for the Americas at Maersk, the world’s biggest carrier. “It’s a major obstacle if the largest market on the East Coast doesn’t have the scale to handle larger ships.” In anticipation of the Panama Canal improvements, the New York New Jersey Port Authority announced a $1.3 billion plan in 2010 to raise the bridge. But was delayed a year until late 2017 because of unanticipated complexities and a couple of bad winters. Some of the biggest carriers, including Maersk, Hapag Lloyd AG, and Orient Overseas Container Line (OOCL), a unit of Orient Overseas International Ltd., said they have no plans to change routes when the expanded Panama Canal opens. "At the end of the day, the infrastructure's just not there," said Gerry Wang, chief executive of Seaspan Corp., the world's largest lessor of container ships. Because the U.S. Navy dredged Norfolk, Virginia, some years ago, that port is ready for big ships, as it Miami, which spent $1 billion on dredging, rail and other improvements.

Dredging Charleston's port needs congressional approval but could be completed by 2020, Newsome said. Dredging at the Port of Savannah in Georgia is expected to be completed in 2018. New Orleans and Mobile, Alabama, are preparing for the large ships as well.

Another possible drag on new canal traffic is the slumping global economy, which has pummeled shipping rates and left many cargo ships idle. Retailers looking for discounts on shorter trips to the East Coast through the canal may be disappointed. Experts say shippers’ margins may be too weak to pass savings on.

"Traffic will only shift to East Coast ports if the carriers pass on savings to customers," said Gross, a partner at FTR Transportation Intelligence. "But the industry is already bleeding, so it's hard to see how."