Using falsified credentials to pose as legitimate truckers, criminals contract to carry the load, drive their own truck to a warehouse or distribution center, and simply pick up loads in need of delivery. 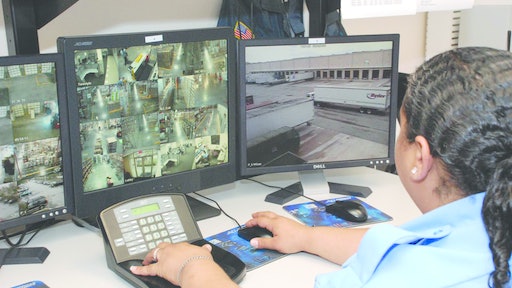 Thieves have turned to identity theft and sophisticated fraud to steal drugs, electronics, and food right off the loading dock, according to Fortune Magazine. The biggest target, surprisingly to some, is food, which can be sold back into the supply chain through unscrupulous distributors. “I’ve never seen a serial number on a package of chicken,” says Keith Lewis, CargoNet’s vice president of operations. “Once you eat it, the evidence is gone.”

A new generation of tech-savvy truck thieves are innovating on old methods.

“One of the M.O.’s that’s on the increase is in a sense identity theft—impersonating another company,” says Nick Erdmann of the security technology firm Transport Security.

The tactic is known as a fictitious pickup. It starts with loadboards—websites like Dat.com and Truckstop.com where shipping brokers list loads in need of delivery. Though the contents of those loads aren’t listed, canny thieves can spot the valuable ones based on certain details: Loads requiring high insurance minimums, loads requiring a team of drivers, or loads coming out of particular locales, such as technology corridors.

Then, using falsified credentials to pose as legitimate truckers, criminals contract to carry the load, drive their own truck to a warehouse or distribution center, and simply pick it up. It can be days before cargo owners even know they’ve been robbed.

Editors Insight: Food safety dominates food supply chain discussions today, largely due to the need to prevent recalls and to comply with pending safety laws. One topic that should not be overlooked is food theft, which accounts for millions of dollars in losses every year in the food supply chain.

Technology has made big strides in fleet management in recent years. But Internet-based technology has also given food thieves new capabilities.

More than $18 million of cargo was stolen in the U.S. in the fourth quarter of 2014, according to new figures from CargoNet. Food and beverage items were the most stolen commodity and accounted for 24 percent of cargo thefts. Alcoholic and non-alcoholic beverages were the chief targets in that commodity category, but cargo thieves frequently stole sensitive items such as produce, meat products, seafood, and frozen food.

Shippers and carriers have numerous tools available to prevent food theft. There are vehicle monitoring systems available that alert fleet managers about unauthorized door openings. There are locks that can mount to trailer doors and container doors that secure cargo from the inside.

Food Logistics examines some of these security tools in its August issue. By Elliot Maras, 7-29-15

The Future of Food and Beverage Cargo Theft—and Security

Cargo Theft is a Critical Issue to Food and Beverage Industry