Rates in all three equipment categories held firm on the heels of big increases during the first week of June. 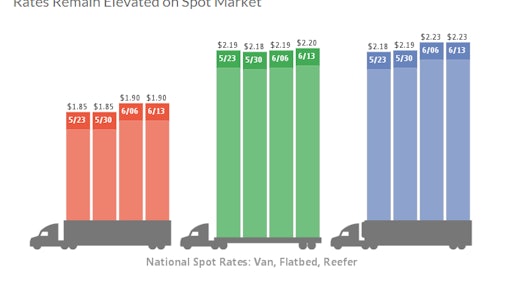 National average rates on the spot truckload market remained elevated during the week ending June 13, reports DAT Solutions, which operates the DAT network of load boards. Rates in all three equipment categories held firm on the heels of big increases during the first week of June.

The national average spot van rate was unchanged at $1.90 per mile (including surcharge) after a 5-cent increase the previous week. The number of van load posts declined 9.3 percent while truck posts increased 15 percent last week, driving the load-to-truck ratio down to 2.4, meaning there were 2.4 available van loads for every truck posted on the DAT network.