A new study from Seabury found 100,000 teu per year of freight has moved from air to sea transport in the last 10 years, with advancements in refrigerated container technology getting credit for the shift. 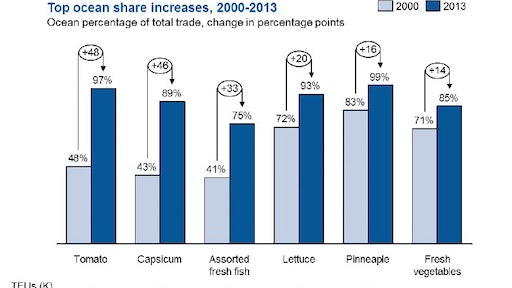 Transportation consultant firm Seabury recently announced the results of a new study that found 100,000 teu per year of freight has moved from air to sea transport in the last 10 years, with the large shift (which amounts to 5.4 million tons of cargo since 2000) being attributed to advancements in refrigerated container technology.

Had the proportion of cargo transported remained at 2000 levels, air freight would have grown at an average annual rate of 4.5%, rather than the 2.6% it has actually seen.

“A decade ago, tomatoes were just as likely to be transported by air as in a reefer container," said  the report’s author Derek Brand, maritime advisor at Seabury. "Today, tomatoes are transported almost entirely in containers. The same holds true for numerous other perishable commodities. The volumes that have shifted to ocean transport are significant for the air cargo industry.”

Perishables have been one of the main commodity categories for mode shift, with volumes worth approximately 100 thousand TEU per year having shifted to ocean. Nearly all of this mode shift has happened in fresh foods according to the report. This shift is particularly pronounced in certain perishable commodities, such as tomatoes, capsicum, fresh fish, lettuce and pineapples.

While mode shift has largely stabilized with traditional reefer containers, new technology has the potential to be an engine for growth. What will be very interesting to watch will be the extent to which longer trade lanes grow once ocean transport becomes a viable option. We may find that trade flows that currently rely on air transport may actually be constrained due to poor economics. Once ocean transport becomes a possibility, some markets may open up quite a bit, dramatically changing the trade structure for these commodities.