Global rate levels are no longer sustainable and with the lines’ GRI (General Rate Increase) mechanism soon to be defunct on European trades due to new European Union (EU) regulations that are about to be implemented, carriers will need to find new tools. 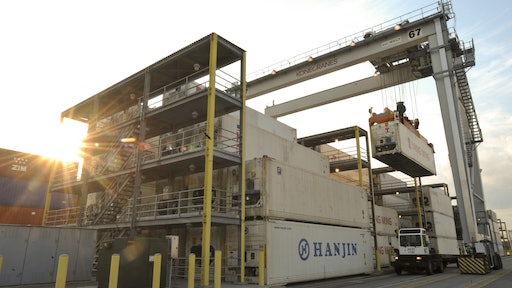 Further expected container shipping liner losses throughout the first half of 2016, exacerbated by the poor prevailing spot and contract freight rates will lead to a major trigger point at some stage later this year, according to Drewry Maritime Research. This will happen either through radical capacity management at the trade route level and/or a much more sensible and logical approach to commercial pricing, according to the latest Container Forecaster report published by Drewry (link provided below).

Global rate levels are no longer sustainable and with the lines’ GRI (General Rate Increase) mechanism soon to be defunct on European trades due to new European Union (EU) regulations that are about to be implemented, carriers will need to find new tools.

Drewry estimates that global freight rates will deteriorate further this year while at the same time carriers will no longer be able to reduce costs at the same pace, given that the main advantages of lower fuel prices have already been realized.

At the moment, ocean carriers continue to cling to the belief that the lower slot costs of the 14,000 TEU and 18,000 TEU vessels will bring them success. However, Drewry’s contention after a recent study is that the hoped for economies of scale are much reduced after vessels of this size are deployed.

Having focused on the cost side for so long, it is vital that carriers turn themselves to the revenue side of the equation if shippers are to have a sustainable container industry.

Some 66 void sailings in February in the major east-west trades did nothing to prop up freight rates. A global idle fleet that hit one million TEU (5 percent) by March also seemed to do little to sentiment. Drewry even heard anecdotally that spot rate levels from Asia to the West Mediterranean reached as low as $5 per 40 feet.

While global handling growth is forecast to reach an estimated 2.1 percent in 2016, which is not  back in 2009 negative territory, the industry could face further challenges by the second half of this year if current commercial trends continue. Drewry believes a trigger point will be reached when more radical action on the capacity front will have to take place.

Neil Dekker, Drewry’s director of container research added: “This inflection point will only deliver any kind of market stability if carriers start to use their in-house rate profitability models and offer commercially sustainable freight rates,” said Neil Dekker, Drewry’s director of container research. “Ocean carriers should be looking at revenue per TEU rather than industry load factors. In a world where overcapacity is a given on every trade, headhaul load factors of, for example, 85 percent need not be considered a disaster by any means. With 2.6 million TEU of new capacity to be delivered by the end of 2017 this kind of load factor and potentially even lower is the new reality, so get used to it.”

To view the container report from Drewry, click here.