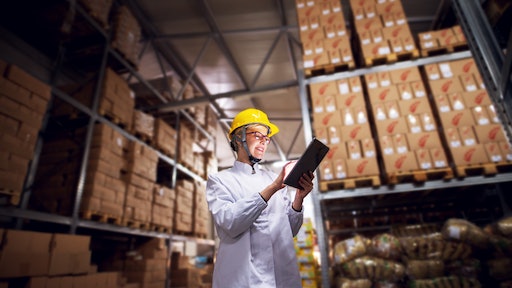 Three panelists representing different segments of the cold chain weighed in on the challenges and opportunities in the cold chain and what role software and technology is playing.

Several live polls were conducted during the webinar, including one on food safety. Not surprisingly, it’s a topic that most companies are very concerned about.

For example, while better labeling and barcoding can provide consumers with more detail about a product’s origin and how it was grown and harvested, the transportation segment still lacks complete visibility.

The reason, in part, has to do with the highly manual processes that still exist in the transportation segment. In addition, the carrier—rather than the shipper—has historically been the primary party for protecting products. But, the Food Safety Modernization Act (FSMA) has shifted some of that responsibility to the shipper, explained Deck.

“Shippers now own a larger portion of the responsibility for assuring food safety,” he said. As a result, shippers must exercise due diligence when vetting carriers and jointly work with them on these responsibilities, whether it involves proper temperature requirements, access to temperature readings and monitoring, or inspecting equipment on both the inbound and outbound legs.

Fellow panelist Jesse VanderVeen, vice president of marketing and communications for Controlant, agreed that visibility issues are a challenge to the integrated cold chain. Each hand-off presents a risk opportunity. Due to multiple parties and complex supply chains, certain data points could be missing, therefore contributing to the lack of complete visibility, she explained.

Rob Ulsh, vice president of dealer and international sales for Great Dane, was likewise unfazed by the poll result ranking food safety high on the list as a concern.

“That’s pretty much on par for this topic,” he said.

Ulsh added that when it comes to mitigating food safety risks during transportation, there are typically three areas where problems manifest: failure to properly refrigerate the food; inadequate cleaning of the trailer/equipment in between uses; and failure to properly protect the food.

Fortunately, there’s consensus in the industry about the importance of food safety, Ulsh remarked.

“Everybody’s trying,” he said. “The fleets that I meet with, the meetings that I’m in, there’s a real focus on food safety. You can hear it in the brainstorming sessions and see it with the various equipment innovations. The industry is really focused on food safety and cold chain management.”

He compared the industry’s hurdles with the ELD mandate years ago to today’s challenges with food safety and cold chain management.

For example, many companies worried initially about the costs of complying with the ELD mandate, which some estimated would be in the neighborhood of a couple thousand dollars per truck. But more affordable solutions eventually made it easier to comply with the ELD mandate.

The same is happening with food safety, said Deck.

“There are sensors out there that are super cheap and easily connected along with more software and technology offerings to choose from, which helps smaller trucking companies catch up to the big guys [with regard to their ability to remain compliant with regulations],” Deck said.

The ability to collect data along various points in the supply chain is the first step; the next is to aggregate the data so it can be effectively used and applied. Deck described it as the “single pane of glass” where shippers are not only able to see all the key information they need, but also share it with other stakeholders. This facilitates more proactive alerting and monitoring, he said, which truly is transformative in terms of visibility.

“When you know time, temperature, location and other data, then you know the full story and can understand what is happening in your supply chain. You can identify risk points and mitigate them, get ahead of issues rather than reacting to them, and build trust with stakeholders and consumers, all while driving continued improvements,” said Deck.

While software and technology bring considerable value and capabilities to managing the cold chain, the panelists emphasized the importance of mapping the supply chain first before making that investment.

For example, Deck said that some companies may not be using a TMS solution yet, so they need to begin by “assessing where they’re at from a capabilities standpoint and start knocking out some of those larger items first” and then they can determine what investments they need to make.

Taking the time to map your supply chain end-to-end helps identify gaps and what exactly needs to be addressed. It’s a critical exercise that needs to happen before you make what could potentially be an uninformed decision about a software and technology investment.

Moreover, “Food delivery is not a cookie cutter type of operation,” said Ulsh. “You have different segments, including foodservice, truckload and other types of operations,” each generating unique data sets.

VanderVeen agreed that perceptions about software and technology being cost prohibitive and cumbersome to deploy are increasingly being dispelled. Not only that, the ongoing digital transformation occurring across supply chains combined with new options associated with emerging technologies is presenting more choices. The scalability associated with IoT and cloud technology is another advantage.

As for blockchain specifically, she acknowledged that it would take some time before its full value will be realized. For one, stakeholders need to be involved from the start and coalesce around what the objectives are for the supply chain before deciding how, when and where to apply blockchain technology.

“The integrity of the blockchain is only as a good as the data going into it,” she said.

Deck also commented on the results of the audience poll, which singled out blockchain as the technology that companies had invested in least as a way to ensure food safety/FSMA compliance in the supply chain.

“Notwithstanding a handful of high-profile initiatives such as IBM’s Food Trust, blockchain is still viewed as a ‘pie in the sky’ technology right now,” he said, referring again to the highly manual nature of the transportation segment of supply chains, which makes blockchain technology difficult to execute.

Ulsh had similar observations. “It doesn’t surprise me that blockchain is ranked so low,” he said. “There are still people who don’t understand it or what the capabilities are, and this will persist for a while.”

On the other hand, the significant percent of those polled who said they had invested in IoT devices (41.7 percent) was also in line with what Ulsh expected, considering he is seeing a proliferation of IoT-enabled devices in the marketplace.

“Great Dane’s telematics program is specifically designed to create a backbone to receive all the data from every other vendors’ devices, and bring that data into an aggregate [for improved fleet management and cold chain visibility].”

At the same time, innovations in refrigeration and packaging are also complementing advancements in software and technology.

According to Ulsh, “Two significant trends we see now on the equipment side are electric refrigeration and the resurgence of cold plate technology.” Both represent zero emission options that promote sustainability in the supply chain.

In addition, solar panels used in conjunction with the trailer and/or the truck body could amplify the sustainability aspect and energy production.

For instance, in the future there could be an opportunity to use energy generated by solar panels for operating lift gates or storing it on the trailer for other uses, said Ulsh.

Packaging is another consideration with regard to sustainability, Deck pointed out, citing meal kit delivery services that have worked to reduce excessive packaging with innovations and other solutions, such as re-usable coolers.

As part of their closing comments, both VanderVeen and Ulsh drew connections between cold chain management and consumer safety, particularly as it relates to perishable food.

“Safety needs to remain a top priority as product moves through the cold chain,” said Ulsh. “A lot goes in to moving food from farm to table. It’s complex and difficult. The industry has accepted the challenge, however, and I think we’ll continue to see a lot of exciting things as we move forward.”