Niche ports for perishable foods are investing in a changing market that keeps their services fresh and operations efficient. 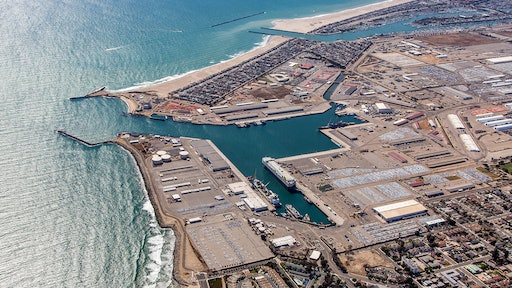 Much has changed in the world over the last 10 years that’s affected the food industry and movement of perishable goods. According to a report by the Brookings Institution, “The Unprecedented Expansion of the Global Middle Class,” the global middle class is expected to grow from 3.2 billion people in 2016 to 5.2 billion in 2028—primarily in Asian countries. As the middle class and economies have grown, so too has the demand for food.

Global supply chains have responded with new technologies to safely transport perishable foods to all points around the world. For ports specializing in the cold chain, this demand has been critical to their operations, while also leading to investments as carrier services and technologies evolve.

Containers on the Move

John Haroldson, marketing director for the Port of Wilmington, Delaware, says the port has a long history of handling perishable foods. It’s also the leading banana port in North America with both Chiquita and Dole making weekly vessel calls. While these liner services have used containerization for decades to transport banana shipments, specialized reefer operators are transitioning from pure break bulk to deck-loaded reefer containers for other fruit shipments.

This trend is occurring most with Chilean winter fruit cargo where specialized reefers arrive with nearly 200 containers on deck with an additional 5,000 pallets under deck, says Haroldson. The move toward containerization is also appearing with the port’s Argentinean apple and pear programs, and is a topic of discussion with its Moroccan citrus customer.

“One advantage is that it adds capacity and economies of scale for cargo-intensive programs, such as our Chilean trade. We’re now seeing reefer operators beginning to compete head-to-head with large container operators by building fully cellular reefer container ships without break bulk pallet capability,” says Haroldson. “These operators can now bring a pure reefer logistics cargo focus to the marketplace, leading to a liner service hybrid while maintaining the core concepts of speed and service.

“This absolutely works in underdeveloped or new markets when the volume of perishables does not justify carriage via a pallet vessel,” explains Haroldson. “This is the next evolutionary phase for the specialized and not so ‘conventional’ reefer—and it is already underway.”

How will the port accommodate expected increases in containerization and volume increases in its reefer warehouses? Haroldson says extending the service of the port’s gantry cranes and investing in a major racking installation program will help with the infrastructure requirements.

“We have a large, 800,000 square-foot on-dock refrigerated warehouse that is one of the largest complexes of its type,” says Haroldson. “Our new real-time inventory management system provides customers with the ability to locate fruit pallets within a stack. However, the difference maker is experienced port labor that has been handling perishables since the 1970’s.”

Lack of Congestion a Differentiator

The move toward greater containerization in place of reefer break bulk ships is also occurring at the Port of Hueneme in California. Dona Toteva Lacayo, chief commercial and public affairs officer for the port, says there’s also consolidation occurring among shipping lines.

“The size of carriers is increasing, market shares are shifting and more perishables are arriving in containers,” says Toteva Lacayo. “We’re closely monitoring these trends and working with our customers to reconfigure our terminals so they’re more container friendly.”

The port imports 600,000 cargo tons of bananas per year as well as other seasonal fruit from Central and South America, while exporting pears, apples and stone fruits from the coast’s farming industry. As a niche port for cool cargoes and dubbed “The Port that Farmers Built,” the Port of Hueneme is unique from other ports along the California coast.

There’s an absence of port congestion, enabling the port to accommodate weekly ocean services. More important for perishable cargo is the port’s ability to maintain the cold chain. There are 299 reefer plugs on port and more than 500 plugs among distribution facilities within a 10-mile radius off port.

“Reliability is critical and providing quality customer service is why carrier customers continue coming back to us,” says Toteva Lacayo. “We have a strong relationship with our ocean carrier customers and understand what their needs are. While some are more container focused, others are shipping with break bulk pallets—what is constant is an efficient operation that doesn’t break the cold chain.”

Along with customer relationship management, the port prides itself on transparency with its customers and marketing support throughout the community. Toteva Lacayo says decisions about vessel schedules as well as terminal, labor and space needs for the coming weeks are part of a weekly port operators group meeting.

“Having the operations department and harbor masters in the same room to set schedules and decide on the operations plan going forward is imperative to our efficiency and level of transparency throughout the port,” says Toteva Lacayo. “It’s what prevents congestion that’s so common at many other ports and maintains open channels of communication.”

Speed On and Off Port

U.S. consumers are eating more fresh produce and demanding healthy, fresh foods all year round. O’Brien says this change is obviously good for people’s health, but it’s also good for the port—which serves as the No. 1 fruit port complex in the United States.

“We’ve made improvements to the gates to move trucks through faster. And our new super-post Panamax cranes will move containers more quickly on and off the ship,” he says. “The port is also adding 40 acres to the Packer Avenue Marine Terminal, allowing for faster operations.

“With the purchase of 29 acres within one mile of the docks, PhilaPort plans to build a 365,000 square-foot warehouse,” says O’Brien. “It will be a combination of refrigerated and food-grade dry cargo. Marine Terminal space is valuable. Our goal is to move the cargo quickly and efficiently from the pier to this new in-land cold storage facility.”

The Importance of Product Quality in the Shipping of Perishables