Ports along the Gulf Coast will be ready to compete for the increase in containerized cargo an expanded Panama Canal will bring their way. 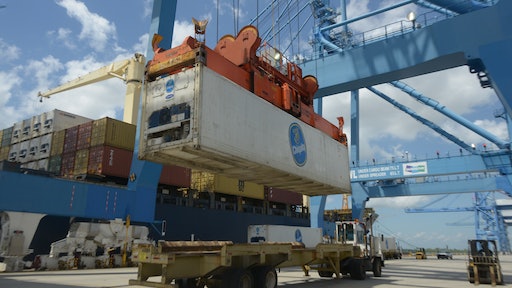 The Port of New Orleans recently welcomed the return of Chiquita after a 40-year hiatus.

When the first ship passes through the expanded locks at the Panama Canal some time in the Spring of 2016, analysts throughout the logistics industry are estimating that ports along the U.S. Gulf of Mexico could experience a boost in container traffic of up to 12 percent.

This is good news for the entire Gulf Coast region, but especially strong considering most of ports aligning the coast are already experiencing record-breaking traffic. Import volumes are up nearly 26 percent at the Port of Houston compared to last year, and many of the other ports in the Gulf region are witnessing volume increases of up to 6 percent as cargo shifted to the East Coast earlier this year due to labor issues on the West Coast.

The big question is whether the ports and infrastructure are ready and capable to handle the potential increase in cargo. With four main ports along the Gulf Coast all set to compete for the new business, all of them have spent millions in infrastructure upgrades to prepare for the Post-Panamax era.

The Port of New Orleans (Port Nola) is well-positioned to accommodate the more than doubling of volumes through 2028. Currently, Port Nola has 45 feet of draft in the Mississippi River and a capability of 50 feet, the second largest container volumes in the Gulf and modern facilities with a footprint for more expansion. More than $500 million was invested in the Port in the last decade, including terminal expansions, completely renovated transit sheds and upgraded infrastructure. The state of Louisiana is also working with U.S. Army Corps of Engineers on an updated study for the deepening of the Mississippi River to 50 feet.

“We are continuing to invest in the Port to stay ahead of the curve,” says Gary LaGrange, CEO of the Port of New Orleans. “Nearly $40 million in new investments to increase efficiencies and expand container handling capabilities are under construction and nearing completion at the Port of New Orleans’ Napoleon Avenue Container Terminal.”

Included among the projects is a $7.9 million refrigerated container racking system, which is jointly financed by New Orleans Terminal LLC and the Board of Commissioners of the Port of New Orleans. A state-of-the-art racking system will have the ability to store more than 600 refrigerated containers at one time. The project, which is already ahead of schedule and due to be completed by the fall, was needed due to surging demand for refrigerated cargo – primarily imported bananas from Chiquita and exported poultry from refrigerated logistics provider New Orleans Cold Storage. Port Nola recently welcomed the return of Chiquita after a 40-year hiatus.

New Orleans Terminal is also assembling two rubber-tire gantry cranes (RTGs) to add to their container marshalling yard in an effort to increase container handling and turn times. The project has more than $4.5 million in private investment.

Complementing these projects is the new Mississippi River Intermodal Terminal currently under construction. The $25.1 million project will deliver a modern and efficient intermodal container transfer terminal to facilitate the movement of marine and rail cargo, while enhancing safety and reducing the carbon footprint of the regional and national transportation systems. The 12-acre terminal is partially funded by a $16.7 million federal Transportation Investment Generating Economic Recovery (TIGER) grant. The project is due for completion in February of 2016.

Port Nola recently launched a $25 million project to rebuild the freight railyard immediately adjacent to the Napoleon Avenue Container Terminal. The project will transform the existing 12-acre railyard into a modern intermodal rail facility and create a 4-acre cargo marshalling yard. The railyard improvements are expected to be ready in the first quarter of 2016.

Port Nola installed two custom-designed, 100-foot-guage gantry cranes that can reach across 19 rows of containers on wider ships transiting the Panama Canal and additional acres of marshalling yard where loaded containers can stack up to five containers high. Also, the Port of New Orleans is the only U.S. deepwater port with six Class 1 railroads, including 132,000 miles of connecting rail tracks. Currently, shipments from the Port of New Orleans can reach Memphis in one day, Chicago in two and Detroit in three via the intermodal rail service.

The Port of Houston currently handles almost 67 percent of all of the containerized cargo shipped into the Gulf Coast region, and according to estimates from the Texas Department of Transportation, the Port will see a 15-percent increase in incoming cargo by 2020, and a 150-percent increase, roughly 4.5 million units, by 2030. Considering the Port is already operating at record pace with almost 20 million tons of cargo crossing the docks through June, the Houston area is in a good position to win even more business in 2016.

Capital improvement projects at the Port of Houston have included spending $50 million on four new cranes that arrived in May. Almost $184 million is allocated to improve and modernize the container terminals at Bayport and Barbours Cut, and another $35 million towards improvements at the general cargo and bulk terminals in the Turning Basin area.

Some in the Houston area are worried that an increase in the use of rail to transport freight could impact mobility at major intersections, but ongoing highway transportation projects at the Grand Parkway and improvements on Hwy. 290 should also help minimize any increase in ground traffic the canal may bring.

The August issue of Food Logistics explored the infrastructure improvements being constructed along the Atlantic Ocean side of Florida, but the ports along the Gulf of Mexico side are also well on their way to sharing the post-expansion traffic.

Early in 2016, Port Tampa Bay will receive and install two new, state-of-the-art, post-Panamax cranes to add to its three existing cranes to enable the Port to handle vessels up to 9,000 TEU capacity. Once completed, Port Tampa Bay will quadruple the size of its capacity from 40 acres to 160 acres and expand its berth length from 3,000 feet to 4,000 feet.

At the end of August the Port also announced plans to construct a 130,000-square-foot refrigerated warehouse on 13.7 acres on Hookers Point in downtown Tampa. Once complete, the facility will receive, label, package and distribute temperature-controlled food around the clock including perishable goods, fruits and vegetables. The Port used to be considered the hub for imported fruit until most of that business went away in the early 2000s. Most of the imported fruit business went to Port Manatee, which is why Port Tampa Bay is excited about the new refrigerated facility.

“In our first year of operation, we expect to accommodate 100 vessels with 400,000 pallets, along with 70 to 80 trucks per day entering and leaving the facility,” says George Livingston, a principal at Orlando, Fla.-based Port Logistics Tampa Bay I Inc., who signed a 27-year lease to operate the facility.

Both Port Tampa Bay and Port Manatee recently received federal approval to participate in the USDA’s cold treatment pilot programs for imported produce. Starting Oct. 1, both ports will participate in the Florida Perishables Trade Coalition that allows grapes, blueberries, apples, pears and citrus from Peru, Uruguay and Argentina to come directly to Florida to be cold-treated for pest control instead of having to go to Northern climates.

Port of Mobile enters the competition

Back in June, the Alabama State Port Authority (APM) announced plans for APM terminals to install two new Post-Panamax cranes and expand the container facility at the Port of Mobile. The $40 million infrastructure investment will improve 20 acres to increase the terminals’ capacity to 475,000 TEUs. The investment by APM is designed to enhance the current construction of $50 million worth of improvements at the Intermodal Container Transfer Facility. Once complete, the facility is expected to service five Class I railroads including Canadian National, CSX, Norfolk Southern, Kansas City Southern and BNSF.

While nobody can be certain that the expansion of the Panama Canal will bring large increases of container traffic to the Eastern areas of the U.S., one thing that is certain is that Ports and cities along the Gulf Coast will be prepared for it when and if it does come their way.

A partnership leads to greater value. It’s the difference between saving $100 on a shipment or saving 10% on total freight spend.
September 1, 2021

Refrigerated Goods Trucking Global Market to Reach $50.02B in 2021

The growth is largely attributed to companies having to rearrange operations due to the Coronavirus disease (COVID-19) pandemic by social distancing, remote working and certain closures of commercial activities
Research and Markets
July 6, 2021

FreshOne is the right partner for all things fresh and frozen thanks to its continued flexibility, creativity and customer service. Learn more in this whitepaper!
FreshOne
May 26, 2021