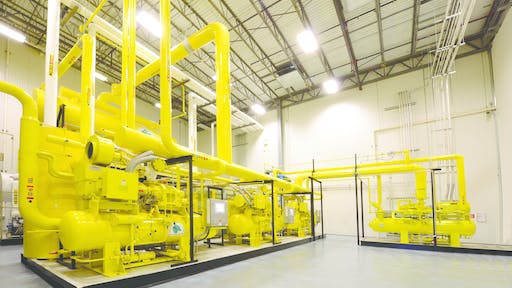 Energy consumption is the name of the game for cold storage providers considering it makes up a substantial portion of operating costs. While the focus on energy consumption itself isn’t new, the tools and strategies to achieve it keep evolving.

According to Nguyen, “Energy is something you can always fine-tune and companies are continually looking for ways to be more energy efficient.” Refrigeration is by far the biggest part of a facility’s energy consumption, he said. Central ammonia systems are the “benchmark” for an efficient facility, but CO2 cascade systems are definitely becoming more popular, Nguyen added.

Admittedly, central ammonia systems are efficient and cheap, but the downside is safety. OSHA considers ammonia a hazardous material and should a leak occur, a hazmat team and the fire department are called to the site, Nguyen said during the webinar. However, a CO2 cascade system essentially uses two refrigerants in one refrigeration system, whereby one refrigerant ‘cools’ the other refrigerant. In addition, the ammonia is contained in one central location, while the CO2 is what’s released to the warehouse, he said. This makes potential leaks easier and safer to deal with and provides other benefits too.

In his experience, Nguyen has seen companies realize a 20 percent reduction in energy costs just by using a CO2 cascade system. Although a CO2 cascade system requires a larger upfront investment, the ROI is occurring sooner, typically less than five years, he said. Indeed, the five-year mark has emerged as the “magic number” and more companies are moving to a “go” for installing these systems rather than a “no-go,” observed Nguyen.

Meanwhile, there are other ways cold storage operators are making a sizeable dent in their energy consumption. Retrotech’s Lanpheare told the webinar attendees that reducing labor and space requirements are high on the list and both make a compelling argument for automation. The case for automation is even stronger for large, centralized DCs where the ROI occurs in three to six years. While the preference for large DCs versus smaller, more regional DCs tends to be a cyclical one, Lanpheare said a number of food and beverage companies are reevaluating the different options and choosing to centralize operations into fewer, but larger facilities.

This helps justify automation projects in several ways. When labor is concentrated in a single or fewer facilities, it’s easier to offset labor costs with automation. Furthermore, food and beverage companies’ own customers are demanding faster service and the ability to “tailor and customize the product(s) and orders being delivered to the client,” Lanpheare pointed out, which automation can help support.